INSIDE APPLE: SECRETIVE AS THE CIA 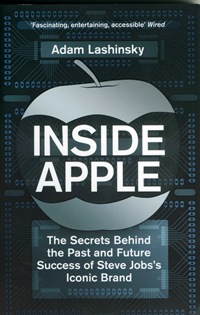 ‘Inside Apple’ by Fortune journalist Adam Lashinsky [John Murray] is a great piece of investigative research into the world’s largest company by market capitalisation (2011) – and the most secretive.

This is not a book about Steve Jobs rather about how the company he created actually works.

Information about all aspects of Apple’s operations is closely guarded. Lashinsky writes: ‘All companies have secrets…the difference is that, at Apple, everything is a secret.’

Job’s paranoia, he tells us ‘built a company that is as secretive as the CIA.’

‘Job’s brutality in dealing with subordinates legitimized a frighteningly hard, bullying and demanding culture at Apple. Under Jobs, a culture of fear and intimidation found roots throughout the organisation.’

A former senior hardware exec told Lashinsky: ‘We have cells like a terrorist organisation. Everything is on a need to know basis.’

Many employees are hired for dummy positions and only have their roles explained after they’ve joined. There are no open doors and many secret rooms with restrictive badge access.

Employees are ‘Scared Silent’. ‘Fear is palpable there’, says Lashinsky, ‘including among partners…no other company has that level of fear.’

‘Apple’s culture may be cooperative but it isn’t usually nice and it’s almost never relaxed,’ says Lashinsky. ‘You need to be a certain kind of egoless and fanatical person to thrive at Apple.’ which he describes variously as a ‘culture of excellence’ and, for many, a ‘true religion’.

Job waned to run a big company with the ethos of a start-up. He micromanaged all areas of the company, working with a 10-member Executive Team (ET) and fewer than 100 Vice-Presidents. He was disdainful of general management and organised the company along functional lines.

The ET meet every Monday. the emphasis is on speed and clarity  of decision-making. Any matters not settled at one meeting must be settled at the next.

Once a year there is a Top 100 ultra-secret gathering, attended by senior Apple execs, board members (which include Al Gore) and the occasional outside guest.

Apple is an HQ-centric company which favours face-to-face meetings. The company does not have a video-conferencing or conference call culture –probably for security reasons.

Major projects were handled by small teams. All aspects of the project are subject to the same obsessive focus. For Jobs the packaging – how the customer opens the box – was important as is the user experience

One of the men Jobs spent most time with was Jonathan Ive, the legendary Apple designer who heads the Industrial Design Studio – an ultra-secret area. They love taking things to pieces to see how they are made.

Lashinsky informs us that ‘Saying no is a core tenet of Apple product development’ They keep their product lines lean - there are only four versions of the iMac for example – and they develop just three projects a year.

Little is said about Apple’s Chinese manufacturing base, a subject of some controversy – except that the company may have outsourced its production but they control every step of the manufacturing without actually having to own the factory.

The company has huge resources. When they decided to move away from disc drives they made a billion-dollar forward purchase of flash memory. ‘This masterstroke,’ says Lashinsky,’accomplished the trifecta of securing Apple’s supply, locking in the lower price, and hobbling the competition’s access to components.’

In a chapter called ‘Own Your Message’, Lashinsky says that Apple ‘manages its image in a conscious, forceful, yet seemingly casual manner that nevertheless leaves absolutely nothing to chance.’ Curate and Control are the watchwords. Apple PR consists of  simple, clear product messages which are endlessly repeated. ‘Revolutionize’ , said a former Apple marketeer ‘may be the most used word in Apple marketing.’

Apple’s Brand czar is Hiroki Asai who leads a team of more than 200 creatives who have been responsible for ‘all the packaging, retail store graphics, website, on-line store, direct marketing videos and event graphics’ for Apple globally over the last ten years.

Apple own 357 stores in 11 countries which generated an average of $43m in revenue apiece. The one in Times Square is open 24/7.

Lashinsky ends his book with the speculations of Apple’s future under the new CEO Tim Cooke which suggests that the company may be kinder and gentler in the post-Jobs era.