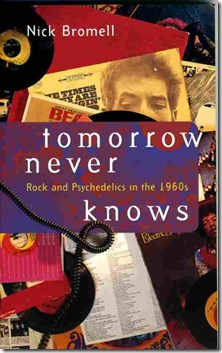 There’s something in the air. Unfinished business. Let’s talk about the Sixties.

I have been circling round this book (an Xmas present from Kate) trying to get a foothold but my thoughts keep ricocheting outwards.

‘Tomorrow Never Knows: Rock and Psychedelia in the 1960s’ was first published by the University of Chicago Press in 2000. Nick Bromell is a US university professor and author in his 50s with college- age sons of his own. His book is very American and aimed squarely at an American audience.

On first reading the big point of his approach and argument was that many academics when writing about the 60s marginalise the importance of music and drugs which were central in shaping the consciousness of the period. He writes:

‘Far more influential than art, film, literature, and other forms of cultural self-expression about which hundreds of studies are written each year, the fusion of rock and psychedelics either inaugurated a way of being in the world, or simply coincided with it, and in either case helped articulate and objectify it…It’s a conversation between two moments. It’s a narrative that takes, however absurdly, an oblivion as its subject. It’s an attempt to make sense of the paradox that poet W.S. Merwin describes when he writes of the 60’s:

“We know that age to be utterly beyond reach, irretrievably past, a period whose distance we already feel as though it has stretch into centuries, ands yet it appears to be not only recent but present, still with us not as a memory but as a part of our unfinished days, a ground or backdrop before which we live. It could be said that we are haunted by it, which would suggest that that time was not done with in us, that what we saw and felt then is still part of our incompleteness and our choices.”

[I am ashamed to say I had never heard of Merwin. According to Wikipedia he has more than 50 books of poetry, translation and prose to his credit. He has won the Pulitzer Prize twice and served as the US Poet Laureate from 2110-2011. See also: openlettersmonthly

‘For the past 32 years he has lived in Hawaii, restoring a former pineapple plantation on the lip of a volcano to its original rainforest state. He is a practicing Zen Buddhist. He stares out of photographs with pale, wise, blue eyes’

Bromell responds to these thoughts in his own way:

‘The 60s are not over for American culture. They might scarcely have begun. We are still asking what the vision was for. We are still coping with the consequences of a moment when the instability of the foundations was revealed and celebrated. We are still wrestling with the sense of a beginning that may also be an ending – both tomorrow and the end of time. And we are trying to do so when the very nature of history itself may no longer make sense, or not the same sense anyway, because of what happened in the 60s.’

There’s an interesting and lengthy article/interview on Bromell and this book on UMASSmag online:

THE ’60S ACCORDING TO BROMELL was created by a generation of Americans suddenly feeling that somehow nothing about their childhoods had been real. That in the suburban sprawl created by their parents things may have been safe, but nothing felt genuine. And they were hung up about this – especially as the juncture broke, as veils were lifted. Not just by the revelations of war and politics and all that was ugly within them, but by the presence of chemicals acting on the mind in such a way as to confirm a multiplicity of states. To suggest that sometimes "I think I know, (ah no?) / but maybe yes / I mean it must be high or low / That is you can’t, you know, tune in / but it’s alright / That is I think it’s not too bad."

Once members of Bromell’s generation let themselves be taken down by marijuana and LSD – psychedelics both, in his opinion – they perceived more than the multiplicity of the mind, of inner space. In a kind of reversal of mind and object, like Bromell’s reversal of audience and performer, the outer world, too, revealed its complicated nature, its hidden beauty, its duplicity, its corruption, its malleable openness to change and death.

For Bromell, an added dimension of this enhanced perception – this perception of duplicity – was a childhood lived within a cloak of secrecy.

It turns out that Bromell’s father was a CIA agent 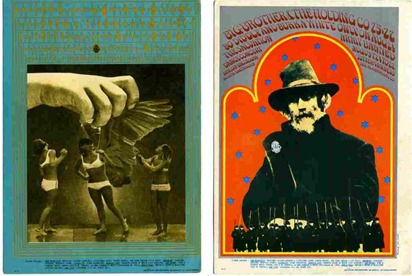 This is what THE GENERALIST thinks. Firstly, it is possible to see now, from a distance of 50 years, that the 60’s – which you could say defines a period that runs from 1957-1973 – was the Western World’s Arab Spring. Huge numbers of young people (baby boomers) with different values from their parents, rising tide of economic expectations + Music + Drugs + we were going to the Moon.

During that period, there was something of a revolution in thinking going on in most academic disciplines, political upheavals, mass protests, seismic shifts in popular culture, mass riots, new awareness and the beginnings of the internet.

For some time I have been thinking about trying to draw together some of the thinkers from that period -  McLuhan, Buckminster Fuller, Ivan Illich, Schumacher to name but a few - because it seems that a lot of their ideas are relevant right now.

I am also concerned that there appears to be a growing memory gap. The people who were there at the time can’t actually remember too many of the details and the youth do not know much about it either.

But also beyond that was the feeling that the business of the 60s was unfinished – that we had to pick it up from where we left it and carry on. In a coffee bar conversation with a journalist contemporary of mine, I discovered he felt that too. Time to get busy. 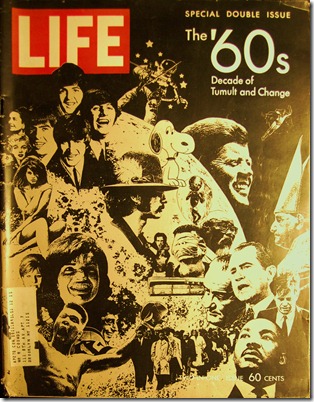 Mint condition copy of this special double issue of Life, a present from Trish who picked it up for me when on a trip to New York. [The Generalist Archive]