Arnie listening to his own commentary on ‘Total Recall’

If your any kind of film fan or a full-blown cineaste or film geek (the term ‘film buff’ has now passed out of the language), the audio commentary provided as part of the package of extras on DVDs has become a talking point and something of an art form. When done well, it provides a brilliant insight into every aspect of the movie-making process; if badly, it is either not worth having or often highly hilarious.

It is interesting that the idea of having an audio commentary predates the DVD. IT seems generally agreed that the first ever audio commentary featured film historian Ronald Haver on the 1984 Criterion Collection laserdisc release of the original ‘King Kong’. It begins: "Hello, ladies and gentlemen, I'm Ronald Haver, and I'm here to do something which we feel is rather unique ... the ability to switch back and forth between the sound track and this lecture track."

Laser discs, first came on the market in the US in 1978, in competition with existing Betamax and VHS cassette tape formats, offering higher quality vision and sound. Always a niche market, it was largely replaced by DVDs by the 1990s. [Good Wikipedia history here]. The DVD itself may itself become an obsolete format in due course as more and more people turn to downloading movies from the Net. At present, such services as Netflix do not provide extras with the download. Will the audio commentary pass out of fashion ? We’ll have to wait and see.

Many directors are keen and happy to provide a detailed commentary on their films but there are a number of famous holdouts. Woody Allen never watches his films after he’s finished making them so is unlikely ever to comment. A good post on moviechopshop is ‘5 Directors who don’t do Commentary Tracks and the films they should deign to discuss’  - namely Spielberg, David Lynch, the Coen Brothers, Quentin Tarantino and Terrence Malick.

Below are some of my favourites. I have also scoured Google (so you don’t have to) and brought together some of the best Top 10 lists and other writings on the subject.

Certain film commentaries are widely recommended, the most amusing being the in-character commentaries for ‘Spinal Tap’ and ‘Tropic Thunder’  and the so-bad-its-good commentaries by Arnold Schwarzenegger on ‘Total Recall’ and ‘Conan the Barbarian’. Roger Ebert's commentary on ‘Citizen Kane’ and Michael Jack’s  on ‘The Seven Samurai’ are widely praised as are David Fincher’s on ‘Fight Club’ and ‘Seven’

THis whole post was triggered  off by listening to the highly detailed and completely full-on commentary by Italian cinema expert David Forgacs, for Bertolucci’s extraordinary film ‘The Conformist’. It provides an absolute wealth of information which deepens one’s appreciation of this masterful film. [The disc I have came via Lovefilm . You can buy it from Arrow Films here and it apparently comes complete with a feature length doc on Bertolucci and a comprehensive booklet. More on this film later. 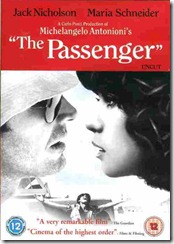 Another gem is the Sony Pictures disc of Antonioni’s strange and extraordinary movie ‘The Passenger’ starring Jack Nicholson and Maria Schneider. The film was  originally released in 1975 but didn’t come out on DVD until 2006 This carries two different commentary tracks, one by Nicholson himself, which is brilliant, and another featuring screenwriter Mark Peploe in conversation with Aurora Irvine. Both give valuable insights into this mysterious film that pays repeated viewings. 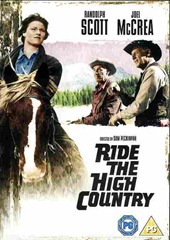 ‘Ride The High Country’ directed by Sam Peckinpah stars Randolph Scott and Joel McCrea legendary figures who had appeared in more than 100 Westerns between them.  The commentary track features the knowledge of three Peckinpah experts Paul Seyfor, Garner Simmons and David Weddle. The film came as part of Sam Peckinpah’s Westerns Collection, a box set which includes ‘The Wild Bunch’, ‘Pat Garret and Billy the Kid’ and ‘The Ballad of Cable Hogue’. 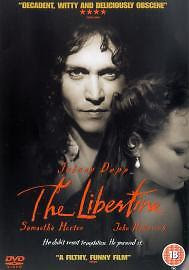 Bringing things into more recent times, ‘The Libertine’ is I think one of Johnny Depp’s best acting roles as the dissolute rake based on the real-life character of Lord Rochester. In this case its the director Laurence Dunmore who takes you through the film, and providing a really interesting perspective on working with Depp and on the issues and difficulties of shooting modern movies. A very professional and interesting performance.

These are the lists I liked best. I learnt a lot and am looking forward to checking some of these out, including Hunter S.Thompson’s on ‘Fear & Loathing’

The Film Babble blog’s round-up of Great DVD Commentaries begins with ‘The Passenger’. A well-written and interesting survey.

AVCLub has put a lot of work into his ‘Now with extra farts! 25 1/2 gimmicky DVD commentary tracks’. Its good stuff.

Even The Guardian got in on the act with a list of films that only get better with a good DVD commentary.

It informs us that ‘On the special edition DVD release of HIGH NOON there’s a commentary track from family members of the film’s composer, writer and director. Each track is unique and provides the viewer with a different perspective on the film they believe they’ve come to know.’