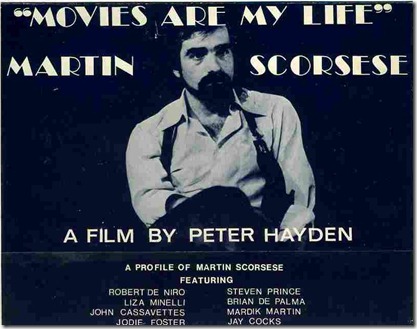 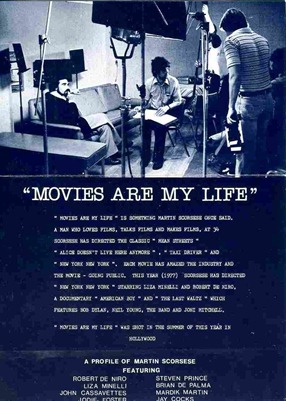 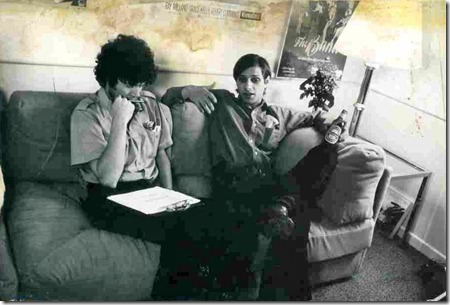 There’s a long back story behind these pictures. Brief version is when I was working as Dick Tracy at the NME I wrote a story about Peter Hayden, a maverick mixture of danger and charm. The story he told was that he had been to Cannes to try and raise some money to make a film, when he went to a screening of ‘Mean Streets’. So knocked out was he that he forgot his own project and decided that he had to meet Scorsese. He went to his hotel apartment and got thrown out twice. When he came back the third time, Scorsese, admiring his chutzpah, had a conversation with him and they got on like a house on fire. By the end of the conversation Hayden makes a deal to distribute ‘Mean Streets’ in Britain. Thus began a long saga and a battle to try and get the film shown. The main distributor would only send it out as a double bill with ‘The Sweeney’. Hayden fought on, using guerilla tactics to promote the film, and they finally got a showing at the Odeon in Kensington High Street which was a complete sell-out as I recall. The huge blue poster they did was magnificent. Someone nicked my copy from the wall of the NME office. You know who you are!!

Hayden also managed to maintain contacts with Scorsese and, by some means, I can’t remember, ended up making this one-hour documentary, which was shot in the summer of 1977. That year Scorsese shot ‘New York, New York’ and ‘The Last Waltz’.

Hayden’s documentary was well regarded and is now a real cult item, as  it is virtually unavailable. I haven’t seen Peter for many years and just hope he is out there somewhere.

The two top images make up the promotional fold-out leaflet for the film. The photo is an original, mounted on card, damp stained. It shows Hayden on left with Steven Prince, shot presumably during the making of this documentary.

To explain who Prince was we need to go back to Peter Biskind’s book:

‘There is a famous scene in Taxi Driver where a gun dealer appears in Travis Bickle’s apartment with a case of pistols. Recalls Sandy [Weintraub, Scorsese’s producer and girlfriend 1971-1975], “I told Marty that not only do I know a guy who could play the part but he could bring his own guns.” Having worked for her father, Sandy had known “little Stevie” Prince since childhood. “He had been doing heroin on and off for years,” she continues. “He had black circles under his eyes that went down to his elbows.” Later he became indispensable to Marty. “If something went wrong, hopefully he was sober enough to take care of it.” Says [Jonathan] Taplin: “He was like a bodyguard, the doorkeeper. Sometimes – like that Dirk Bogarde movie The Servant – you had the feeling that he could appeal to Marty’s paranoias in such a way that he could make Marty do things. In that sense had had quite a bit of power.’

in 1977 Marty Scorsese also made a documentary entitled ‘American Boy: A Profile of Steven Prince’. Released in 1978, it was premiered at the 16th New York Film Festival and was reviewed by Morna Murphy in the Hollywood Reporter [9th Oct 1979]. This describes the film as follows:

‘Prince’s affluent childhood is made real by the use of family movies and photographs of relatives accompanied by humorous anecdotes and descriptions. Most of the 54 minutes of film is spent in a friend’s Hollywood home, but there is little sense of confinement. Scorsese casually sets the stage, and from Prince’s rambunctious arrival to the reenactment of violent or tragic scenes from his life, there is a feeling of movement and of being witness to these events.

‘Prince himself is a handsome young man, with hooded, expressive eyes…His approach to life is frankly hedonistic and he talks of his years of addiction to heroin (“life juice”) with zest and candor. He proves to be a born storyteller with a knack for vivid description that makes one believe even his most outrageous stories implicitly. Only the contradiction in his final statement (did his dying father ask “Are you happy?” or “Are you having fun?”) raises the question of truthfulness. Is this slice of life or entertainment?” ‘

Still shot during the making of American Boy. Source: frequentsmallmeals.com

There is a great lengthy five-part feature ‘Understanding Scorsese: A Martin Scorsese Profile’ by Trevor Hogg on the Flickering Myth site.  Part 2 contains the following

‘American Boy: A Profile of: Steven Prince (1978) is a documentary Martin Scorsese produced about an ex-drug addict and road manager for Neil Diamond who portrayed a gun dealer in Taxi Driver. As Steve Prince talks about his family, the filmmaker intersperses home movie clips shot during Prince’s childhood. Some of the stories told have served as cinematic inspiration for the likes of Quentin Tarantino (Pulp Fiction) and Richard Linklater (Waking Life). During the opening credits,Time Fades Away by Neil Young is played. A sequel was released called American Prince (2009) which was helmed by Tommy Pallotta.’

You can watch this film on MUBI EUROPE

Peter is fine and well. We had a beer last week together and I can put you in touch should you wish, email me on thecolruss@gmail.com with your contact details should you wish for him to contact you. Yours sincerely, Colin Russell