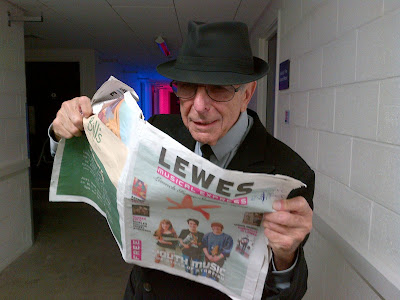 This is the great man himself backstage at the New Leeds Arena on the 7th Sept 2013 with a wicked grin on his face, reading the LME. How cool is that!

The photo was taken by Stephen Arch, longtime Lewes resident, who had been travelling the world with the Leonard Cohen road-show for four years as his lighting crew chief.

We had literally bumped into each other by chance in the Lewes Arms when Steve was just grabbing some lunch before heading up North to rejoin the tour.

I gave him some copies of the very first issue of the Lewes Musical Express, produced by myself and designer Raphael Whittle. [We published four issues of this paper and one issue of the Brighton Musical Times before retiring for a lie-down.]

Later that day, Steve bumped into our mutual friend the artist Pete Messer and it was his idea to photograph Leonard reading the paper. When Steve asked Leonard, who was coming off stage after a sound check, whether he would do him a favour and pose for this picture he said: “Yeah bro. Let’s do it”. How cool is that.

You can read all five issues online here: www.lewesmusical express.com 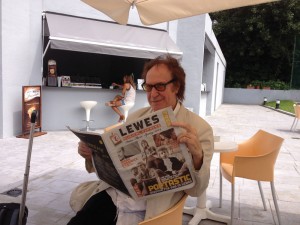 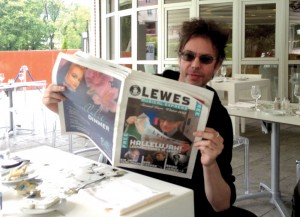 Original caption:
We have Derek Haggar thank for these two great pictures of the legendary Ray Davies of The Kinks and Ian McCulloch of Echo & The Bunnymen. They are both reading the LME in sunny splendour in Spain. Ray was appearing at the Heineken Jazzaldia Festival on July 23rd and Derek was there as his guitar tech. The day they were leaving, Ian arrived for his gig on the 24th. Derek reliably reports that they both loved the paper. More musical legend readers to come in future issues.
at 6:29 pm