Another recent visitor to THE GENERALIST HQ was Tony Bennett, the head honcho behind Knockabout Comics, one of the very few British independent publishers and distributors of adult and underground comics.

We worked out the last time we probably saw each other was at the very first WOMAD festival at the Bath & West Showground near Shepton Mallet, Somerset in 1980. On the bill was Peter Gabriel, Don Cherry, The Beat, the Drummers of Burundi, Echo & The Bunnymen, Imrat Khan, Prince Nico Mbarga, Simple Minds, Suns of Arqa, The Chieftains and Ekome amongst others. Awesome. Needless to say we had a lot to catch up on.

First some history of Tony's pioneering role taken from a 2006 interview by Joe Gordon on the Forbidden Planet blog. Full text here:

'Not only has Knockabout been instrumental in pioneering the market for challenging underground material it has also been at the forefront of legal battles over censorship; it is probably no exaggeration to say that the increased leeway enjoyed in the medium today is thanks in no small part to the cases Knockabout has fought out with The Man so we could have the right to decide what we wanted to read for ourselves.

Tony: In the late 60s and early 70s I was working with a publisher and distributor called Unicorn Bookshop [run by Bill Butler]. Originally in Brighton, we moved to a farm in West Wales where we were growing our own food and had a printing press in the barn. Unicorn, as well as publishing books on self-sufficiency, cannabis and poetry was importing Underground comics from the USA. This really sparked my interest in comics, partly for the wide and weird content and partly because they were creator-owned. It even encouraged me and a friend to draw and print our own self-indulgent heavily derivative comic, Trip Strip, which we distributed at festivals. With the demise of Unicorn in 1975, due to bad debts I took over some of the distribution and started publishing the Gilbert Shelton's The Fabulous Furry Freak Brothers in 1975 [through his own company Hassle Free Press]. 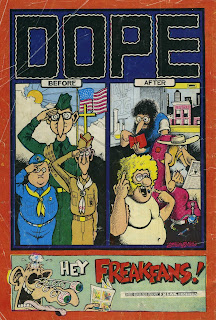 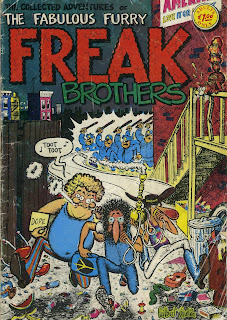 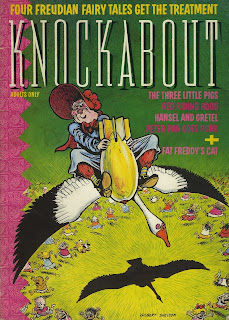 From the Generalist Archive: Front and back cover of the first Furry Freak comic published in UK by Knockabout; Knockabout Anthology No 10 with cover by Gilbert Shelton. Thirteen issues were published in the 1980s. 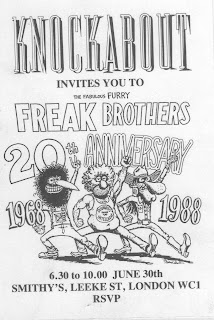 
The company [which changed its name to Knockabout Comics in 1978/79] also became the UK publisher for Robert Crumb and original work by British comic artists Hunt Emerson and Bryan Talbot. It has also published many works by Alan Moore including 'In Hell' and, most recently, his new remarkable novel Jerusalem [see Generalist review]. See the Knockabout website for many more titles. 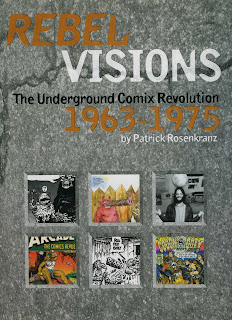 Tony arrived laden with some great recent Knockabout productions (see below) but he also lent me this fantastic book by Patrick Rosenkranz which documents the US Underground Comic Revolution through interviews with 50 of the leading comic artists of the period. Alongside Crumb and Shelton there is Dan O' Neill, S. Clay Wilson, Rick Griffin, Victor Moscoso, Bill Griffith, Robert Williams, Ron Cobb and many more.Published by Fantagraphics Books in 2002. Essential. 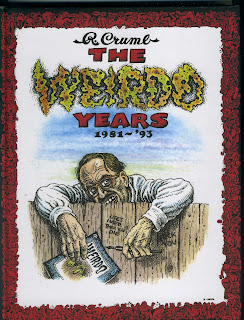 'Wierdo' was a magazine-sized comics anthology created by Robert Crumb in 1981, which ran for 28 issues until 1993.

According to the preface by his wife Aline-Koninsky-Crumb. 'Wierdo' was inspired by 'Mad' and 'Humbug' and the Underground comic culture, which had boomed in the 70s. It came out around the same time as 'Raw', the 'high-brow' remarkable outsize graphic/comic journal led by 'Maus' creator Art Spiegelman [who I interviewed in London]. The Crumbs went for 'low-brow' and drew together a whole bunch of artists who worked on the edges of acceptability.

R. Crumb himself edited the magazine for the first 3 1/2 years and gave it what Aline calls its 'wacky brand-X feel'. It was passed on to Peter Bagge who, she says, changed the mood to a more punk 'zine and many younger artists got their start in its pages.

This substantial hardbound book brings together all the Crumb material from the magazine, which includes mad '50s style photonovel sexy girl adventures as well-as the conventional comics which Crumb is world-famous for, The last issue was produced in France where the family Crumb  (with daughter) emigrated to and are still domiciled.


Didn't the late great Australian art critic Robert Hughes put Crumb up there as a modern day Brueghel! His work is xtraordinary, often hard to take, remarkable for its visceral intensity, insanity and humour. If you watch the long documentary Crumb, you'll understand that he came from a strange household. The bits in the film that still make me gasp is watching Crumb draw in the street, sitting on a  bench with street life ebbing and flowing around him. Extraordinary facility. By the way, this stuff is for adults !! 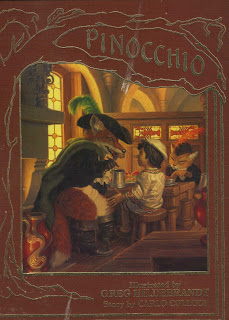 Pinnochio and me go way back. Can't remember reading the original Carlo Collodi story as a kid but def saw the Disney movie and no doubt read simplified version of tale. But did read Collodi's full version to Number 2 son as I recall. It's quite a dark bedtime read. This edition is the only one to survive in my library and my favourite up to this point, illustrated as it is by pencil drawings and gorgeous full-colour full-page frames by the remarkable Greg Hildebrant. Can't remember where this edition came from. It's published by the Unicorn Publishing House in New Jersey in 1986. 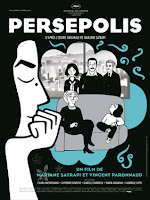 Now confronted with a radical adult re-visioning of Pinnochio by Winshluss, a.k.a. Vincent Paronnand a French comic artist and filmmaker, published in France in 2008. It won the prize for best album at the 2009 Festival International de la Bande Dessinée at Angoulême the following year.

Paronnaud is best known for co-writing and co-directing with Marjane Satrapi the highly acclaimed animated film Persepolis (2007), for which they received numerous awards including the Jury Prize at the 2007 Cannes Film Festival as well as an Academy Award nomination for Best Animated Feature. It was developed from Satrapi's graphic autobiography depicting her childhood up to her early adult years in Iran during and after the Islamic revolution.

Pinnochio is a remarkable piece if work, a beautifully bound volume of 188 pages, printed on thick paper with ornate endpapers. In this version, P has become a little metal boy who appears to be indestructible, His full colour adventures through the book are interspersed with other parallel narratives including black and white  Adventures if Jiminy Cockroach, Other stories in a kind of brown charcoal effect are self-contained. Elements of Collodi's story are cleverly given new twists. There are some very unpleasant things here including a clown dictator to chill the blood but the artistry, ingenuity, unexpectedness and sheer beauty on display, the constant shifts in frames, strands and technique, make the journey a bare-knuckle ride and a visual feast. 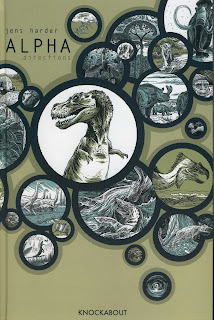 This REMARKABLE book (just to make the point) takes us on a journey thought time and space from the very beginning of our universe to the birth of earth and the emergence of life and the human race. It's an extraordinary achievement.

Here is the book's creator Jens Harder explaining how he came to produce 'Alpha':

'The discussion of time has always been at the heart of things for me, this intangible construct of the fourth dimension, which can be approached more easily in comics than in a time-based medium. Though the presentation of more than 14 billion years in just 350 pages is something of a joke (at a rough estimate of 2,000 drawings, means on average just one image for every seven million years).

'My own particular obsession being the great mystery of the origin of life which always seems like a "miracle" to us humans. Thus I ended up devoting a not insignificant part of the book trying to approach this through the drawings.

'Meanwhile, running in parallel to the development of the book, I was following the development of our children from the first blurry ultrasound images until four and a half years later, where in five minutes they can turn our entire living room into a battlefield but also with great joy, produce their first drawings.

'Above all it is always the realisation that, in "Alpha" of course, that nothing is finished, nothing perfected in this ever-changing story. It changes constantly, but since the beginning of my work in 2004, the state of knowledge has grown enormously throughout the world. Much has been confirmed, much however has also been abandoned - but which only in rare cases did I take into account. If there should one day appear an expanded edition of the first part of this trilogy I will add or modify dozens of pages. And who knows, maybe by then another comic book creator will have taken on "the longest story ever" adding their own interpretation - and I think it would all be worth it.' 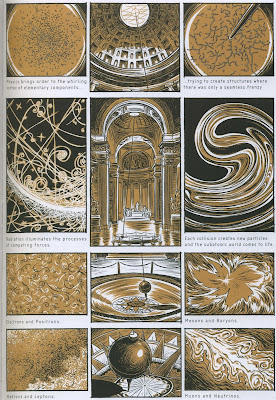 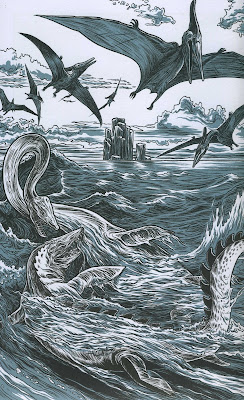 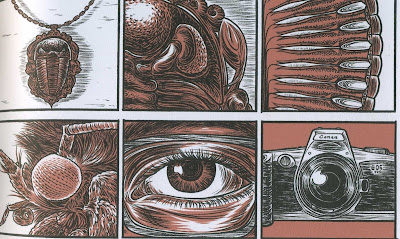