RODIN IN LEWES: THE KISS 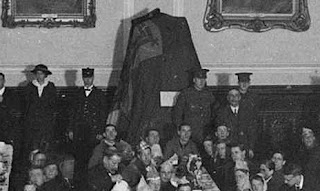 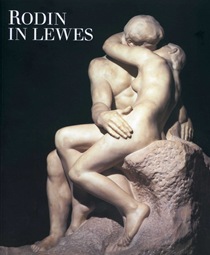 The story of Rodin's 'The Kiss' in Lewes has hit the national press again with the discovery of a new photo that shows, for the first time, the wrapped statue, sitting at the end of the Assembly Room which is full of troops having Xmas dinner before shipping out to France and, in most cases, to certain death.

In a nine-year project, I uncovered the story of how 'The Kiss 'commissioned around 1900 by two gay guys – E.P. Warren and John Marshall - came to be in Lewes and what happened during its 30-year sojourn in the town. I then persuaded the Tate Gallery to lend it to me in 1999 for a five-month long exhibition, in the company of other Rodin works borrowed from the V&A and the Musee Rodin in Paris.

You can read the fuller story in this previous post: JM ARCHIVE: RODIN IN LEWES  written on the occasion of the Tate lending 'The Kiss' to the new Turner Gallery in Margate.
Was contacted recently by the Art Gallery of NSW, Sydney, Australia who  are staging a major exhibition opening this Nov 5th and running to 5th Feb 2017  entitled 'Nude: Art from the Tate collection' in Sydney. It features the Lewes Kiss - the first time it has ever left Britain.

As to how and why 'The Kiss' was lent to Lewes, here's an extract from catalog essay:

'For reasons that again are not known, Warren then offered to lend it to Lewes Town Council. It was to be placed in the Town Hall, at the South End of the Assembly Room. Negotiations began in January and were concluded by May 1914; on 4 August war was declared. The Kiss was moved from Lewes House to the Town Hall by trolley, using three men and four horses, and was ' installed in the Assembly Room on 2 December 1914.

The same week, the Assembly Room was opened as a reading, writing and recreation room for troops billeted in the town. Regular boxing matches were staged in the same room, where, according to the recollections of one resident (recorded by the Borough librarian), the sculpture was 'used as a vantage point from which to obtain a better view of the boxing ... at one match, the audience pressed so closely round the statue that you could see the sweat running down the woman's back.'

Then, early in 1915, The Kiss was suddenly wrapped in canvas and marked off with a guard rail. Whatever the cause of the cover-up, it was not written about in either the Council minutes or the press of the day. Press reports from 1929 refer to 'susceptibilities being offended' and to the undraped figures of The Kiss 'as offending the proprieties'. The search for more evidence will no doubt continue, but the upshot was that the Town Council returned the statue, saying only that the room did 'not lend itself to such a noble piece of statuary.' On 26 February 1917, The Kiss was once more taken to the stable block where it was to remain for a further sixteen years.' 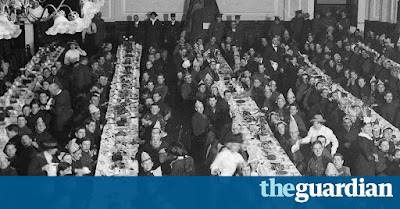 Collection of 150,000 glass plate negatives includes image of blanket-draped sculpture during soldier’s Boxing Day dinner
The article is by Maeve Kennedy, who interviewed me for a story on the original exhibition back in 1999: Lewes to Kiss and make up at last

The photo has come to light because of the work of Brigitte Lardinois who is working with a team to steadily digitise and catalogue the vast Reeves collection ( 1/10th in so far) made by four generations of the family, the oldest family photographic business known, still operating from the original studio in the town. It is unique in the world, including every scrap of documentation to enable the identification of all the subjects from 1855.

Lardinois came up with the wonderful idea of displaying the collections treasures in light boxes placed in the windows of businesses throughout the town. This year's presentation focuses on the First World War period.

*
To come is an article 'Rehabilitating Kate Fowler Tutt (1868-1954) by Frances Stenlake, to be published in a forthcoming edition of the 'Sussex Archaeological Collections' its a valuable and highly detailed account of Miss Tutt's contributions to the town.
The story that I was told was that Miss Fowler-Tutt had been responsible in some way for having 'The Kiss' covered up on moral grounds. Stories dating back to 1915 suggest that was some kind of kerfuffle over the statue and that its being covered was not just to protect it from being damaged. Here's one:
The Jackdaw, whose regular column ‘Caws from the Castle’, appeared in the weekly Sussex County Herald, wrote a piece entitled ‘Under The Canvas’ for the issue dated 25th Sept 1915.

‘A reader who writes under the well worn name ENQUIRER asks me if I can give any information as to the ugly lump of canvas surrounded by a fence in our Town Hall. Yes, Enquirer, I can. It is not all ugly canvas which you can see. It is merely a covering which hides from the public gaze one of the most beautiful pieces of statuary of recent years...’
He concludes: ‘Strange to say, since its erection there, it has hardly seen day light. Practically the only times when the public can see this statue are at entertainments and then it is covered up. Why is this? Is it decorously covered hidden from view because of our prurient minds.’
Miss Fowler-Tutt was definitely vocal on issues regarding young girl's behaviour in a town full of young troops but there is no firm documentation linking her with a cover-up of 'The Kiss'. Was it all just Chinese whispers? We may never know the whole truth.
at 4:11 pm