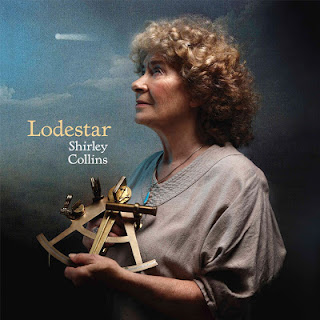 'For Shirley Collins, a Folk Revival of Her Very Own' by Jim Farber [New York Times 7th Nov 2016]

The Quietus Podcast  by Luke Turner

After a day of gloomy weather and unsettling news on the radio, a day of grey cloud and damp rain, Lewes town is getting ready for Bonfire. As I write, bangs & explosions, nearby and faraway, punctuate the damp night air while I'm listening to Shirley Collins 'Lodestar' album in a state of wonder. Its been almost on rotate for the last two days.

Earlier this evening I briefly attended Shirley's in-store launch at Union Music, packed to the gills with advance record buyers. I already had mine.

The record was discreetly made in Shirley's front room in a house just up the street from me. Two days ago I was just walking past Shirley's house when she called out my name, came to her front door and gave me the record. I'm waiting for a call from the New York Times, she said.

Let's just lay down the law on this one. This a classic record that is also tremendously unexpected, daring, deep. 40 years after her last recording and 30 years after she stopped singing completely, Shirley confidently emerges with a set of recordings that have a special magic. Quite possibly amongst the most important folk records ever made.

Her collaborators are to be congratulated and thanked for providing immaculate settings for a suite of songs that will touch you on all kinds of strange levels. Reaching through time - will you let me live just a few years more - the lyric of 'Death and the Lady' comes into my consciousness.

The album is beautifully constructed and takes you on a trip: From old Sussex mirroring Shirley's roots in Hastings and her connection with friend and mentor Bob Copper, patriarch of the Copper Family.; to the southern states of the USA when as a 19-year old, she accompanied the musicologist Alan Lomax on a song-recording trip. Finally: 'Silver Swan': A gem.

This album has so much to give and will inspire others to stretch their imaginations. Is it too fanciful to think that these recordings will awaken something in our English and American hearts at a time when the Klingons seem to be making the big plays.

I googled 'lodestar' and Google offered this:

lodestar
ˈa star that is used to guide the course of a ship, especially the pole star.
at 10:52 pm