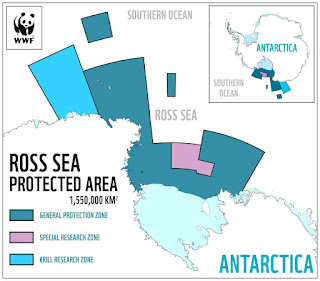 An agreement to create the largest marine reserve in the world, around twice the size of Texas, has been reached by the representatives of 24 nations and the European Union that make up the Commission for the Conservation of Antarctic Marine Living Resources (CCAMLR).

This international deal, due to take effect in December 2017, will set aside 1.55 million square kilometres of the Ross Sea, a deep Antarctic bay 3,500 kilometres south of New Zealand, from commercial fishing and mineral exploitation.
The Ross Sea is one of the least-altered ecosystems on Earth, containing a complete array of marine mammals, seabirds and other marine life that are vulnerable to human disturbance and the effects of climate change. The biodiversity in the region includes a significant percentage of the global distributions of: Adélie penguins (38%); emperor penguins (26%); Antarctic petrels (30%); Antarctic minke whales (6%); Weddell seals (45%) and killer whales (50%).


It is a milestone for ocean conservation and Russia’s relationship with the rest of the world. After years of unsuccessful talks, 24 nations and the European Union agreed on 28 October to create the largest marine reserve in the world,
According to the full account in Nature :'It is the first time that countries have joined together to protect a major chunk of the high seas — the areas of ocean that are largely unregulated because they do not fall under the jurisdiction of any one nation.'
The breakthrough on this agreement, which had been undergoing negotiation for many years, was the support of Russia which had previously blocked. Scientists now hope now to accelerate marine protection efforts around the world, particularly in other regions around Antarctica.
Source: 'World’s largest marine reserve hailed as diplomatic breakthrough' by Quirin Schiermeier.
* 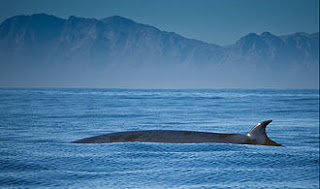 At this year's meeting of the International Whaling Commission (IWC) plans to create the South Atlantic Whale Sanctuary (SAWS) were once again rejected. The idea was first proposed at the IWC in 2001.

This year the proposal was put forward by Brazil’s Environment Minister Sarney Filho, who said it was "high time" for the IWC to take this crucial step to adopt the SAWS initiative, “a mature proposal,” which has been revised and refined over many years.

The proposal's co-sponsors were Gabon, South Africa, Argentina and Uruguay - coastal states who feel the SAWS would benefit them - and a one million signature petition.

South Africa claimed that new whale watching opportunities could help replace lost mining jobs and dismissed the myth that whales were responsible for the decline in fish stocks, which, he said, was clearly due to legal and illegal overfishing.

Supporters of the sanctuary proposal were India, Mexico, Monaco, the United States, Chile, Australia, and the Netherlands, on behalf of the European Union.

An IWC vote requires a three-fourths majority to pass. The sanctuary proposal was rejected with 38 members voting in favour, but 24 opposing and two abstentions.

According to Ayana Elizabeth Johnson: 'These linkages between ocean conservation and other aspects of sustainable development are not commonly understood, and that has financial implications. Right now the ocean goal only receives 0.74% of all the philanthropic funding dedicated toward the SDGs — meanwhile the ocean is 72% of planet! If people don’t understand how intrinsic a healthy ocean is to most aspects of human well-being, they certainly won’t be motivated to invest in the solutions.