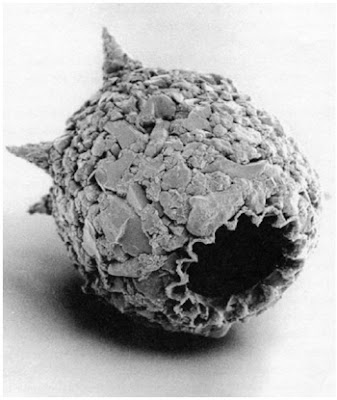 This is a most astonishing, beautiful and intriguing image, taken from the recently published book 'Built by Animals: The Natural History of Animal Architecture' by Mike Hansell [Oxford University Press. 2008]

You're not going to believe this but it is in fact an intricate portable shelter, built from grains of sand, by a species of amoeba called Difflugia coronata, which they carry around for protection. To give you a sense of scale, this little "house" has a diameter of 150 micrometers. Amoebas are microscopic single-celled organisms without any nervous system.

This little picture is triggering so many thoughts in my mind.

As a boy at boarding school, we used to spend a lot of time in a free hours pond-dipping at the local lake - Wiston Pond - and catching, amongst other things caddis-fly larvae which, as you know, built themselves little protective sheaths made of grit, pebbles and sand. This to me was a fascinating thing.

Secondly, I'm thinking about the picture in the last post - that extremely sophisticated, condensed and stylish piece of Swedish technology - the Pacemaker. Compare and contrast. Which is the most beautiful.

Thirdly, I'm trying to get my head round all the hows and whys to do with an amoeba building a house.

I discovered that I was not the only entranced and perplexed by this image. 'Northern Light', is a blogger, living in the Great Northwest of the United States. His blog is called Searching for Bright Light and is a delight. He writes:

Now, WHY would a single-celled "animal" make a "house" with a scalloped door? What are those pointy "fins" in the back that look like a '57 Chevy? How does the amoeba smooth the grains of sand into this oval shape? Where in its single cell does it keep the information or instinct that "tells" it how to make this house? Do these amoebas just live in colonies of little finned, scallop-edged sand-balls? ("Hey Joe, look at Charlie’s new digs!") These guys are ONE CELL, for goodness sake! Am I the only one who is just flabbergasted? How do atheists explain this...random chance? After all, the amoeba could just have likely made his/her door square with zig-zag edges, right?

Here is an extract from review of the above-mentioned book in The Telegraph by Helen Brown.
Full text here:

'We like "building creatures" because we see them as sharing some of the attributes that make us "special". We anthropomorphise, and associate construction with cognitive complexity.

'In fact, creatures of very little brain can prove excellent builders. I was astonished by the magnified photograph of the intricate portable home made by the single-celled Difflugia coronata: a sphere made of hundreds of tiny stones with eight defensive stone cairn "spikes" at one end and frilled "door" at the other.' 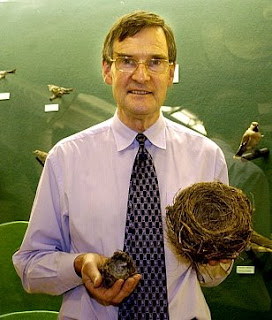 Then, as if to complete a virtuous circle, I discovered an essay by Mike Hansell [right], in which he describes his memories of the occasion when he made a presentation of Animal Architecture to three hundred delegates at a conference organised in England by the Chartered Institute of Building Services Engineers. He began by flashing up on the screeen the following message:
'You don't need brains to be a builder.' There was instant applause.

'This audience response took me quite by surprise because I had not actually thought of my message as a joke, but rather as the most fundamentally important message that I wanted to convey. To illustrate it I give you this structure: It is a sphere composed of a few hundred stones cemented together, on top of which there are seven or eight sturdy spikes, each a cairn of stones, larger ones at the base, smallest at the tip creating a sharp point. At the bottom of the sphere there is a large circular hole ornamented with a pleated collar of particles too small to be distinguishable from the cement that binds them. The diameter of the whole dwelling, for that is what it is, is about 150 thousandths of a millimetre. Smaller than the punctuation mark at the end of this sentence. It is the portable home of Difflugia coronata, a species of amoeba.

'An amoeba, as you very likely know, is a single celled organism. The one cell does everything. It feeds, excretes, moves and reproduces and, in this species, it also builds a home. The cell has no nervous system at all, let alone a brain. Can its extraordinary achievement really be said to be building? Well, as the organism's amorphous bulk glides gently round the bottom of some pond, engulfing food particles and growing, it also picks up tiny sand grains that accumulate as a mass inside it. When it grows to a certain size, the cell then reproduces by dividing its body equally into two. One of these inherits the ancestral home; the other is left the bundle of building material. These stones, we know not how, are then moved to the body surface and arranged to create the distinctive architecture of this species. Just enough particles of the right sizes, big and small, have been picked up to accomplish this.'

I'm even more astonished having read this. I think I need to go and lie down in a darkened room for a while.

See also review of book in American Scientist
at 11:42 am

Thanks for this fascinating post. I feel as enwondered as you at the astounding ways of nature. I'm following up your references. Thanks again.
Magpie

Thank you for the fascinating article. Like you, I am in wonderment at the ways of nature. I'm following up on the references you gave. Thanks again.