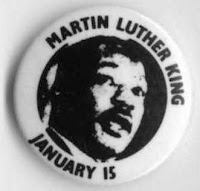 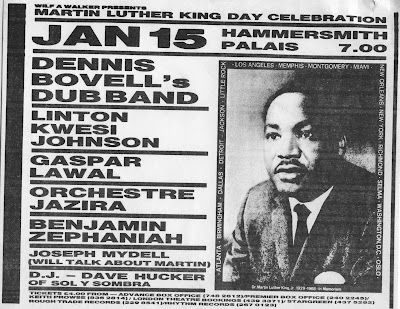 "All men are caught in an inescapable network of mutuality, tied in a single garment of destiny. Whatever affects one directly affects all indirectly."

Back in 1985, I worked on a gig to celebrate Martin Luther King Day. The event was promoted by Wilf Walker (lovely fellow). Richard Adams (or maybe Mikki Rain) did the badge and poster designs. Marie Seton did a beautiful silk banner that was hung above the stage and then mysteriously disappeared by the end of the gig. I wrote the words for leaflet which was distributed at the gig and helped out on the night. I think such a celebration was one of the first in London; the gig was reviewed for the NME by Danny Kelly.

I didn't realise before that the idea of Martin Luther King's birthday a national holiday came from the labor unions, in recognition of King's activism on behalf of trade unionists. Rep. John Conyers introduced the bill in Congress. The King Center lobbied corporations and promoted the idea to the general public - an effort boosted in 1980 by the release of Stevie Wonder's single 'Happy Birthday'. Six million signatures were collected for a petition to support the bill; it's claimed it was the largest petition in support of an issue in US history.

Although he was at first opposed to the idea, Ronald Reagan signed it into law in 1983 and it was first observed in 1986.