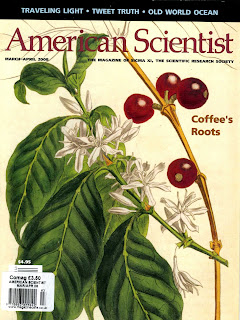 American Scientist is an excellent magazine, full of fresh and interesting information from many different scientific frontiers, guaranteed to get the brain fizzing.

I was particularly taken with the cover story 'The Rise of Coffee' by Fernando E. Vega, which told me a great many things I didn't know, including the fact that Puerto Rico - Vega's native land - is the sole provider of coffee to the Vatican. A research entomologist, Vega is finishing a book called 'Coffee: A Pictorial History.'

*Coffee is the second most heavily traded commodity in the world, after petroleum products, with an estimated retail value that exceeds $70 billion.

*Coffee is grown in more than 50 countries, in plantations which cover 10 million hectares of the earth's surface.

*Only two of the 100 species of the genus Caffea known are commercially traded - Caffea arabica (which accounts for 70% of the world's consumption) and Caffea canephora, which grow naturally in the equatorial lowland forests of Africa.

*Caffea arabica is endemic to the highlands of Ethiopia, Sudan and Kenya. There are conflicting theories how, at some point, the plant spread to the Yemen where, by 1450, it recorded as being used by Sufis. From here, it reached Cairo, then Damascus, then Istanbul. In the process, the cofeehouse, as a meeting place for news, ideas and political debate was born.

*The first coffeehouse in the US - the London Coffee House - opened in Boston in 1689; the first in New York was The King's Arms in 1696.

*The Dutch started growing coffee in Java in the 1690s, having obtained the seeds from the port of Mocha in the Yemen. Plants from Java were then sent back to the Amsterdam Botanical Garden, from which a plant was sent to France in 1713, where the first scientific description of the plant was carried out. In 1720, a French naval officer took two plants (one of which died) to Martinique and from here it spread to all the other Caribbean Islands. The Dutch took other plants from Amsterdam to French Guyana and Brazil in the same period.

*More than 800 volatile compounds can be detected in the aroma of roasted coffee.

*Professional testers in the coffee industry are called "cuppers".

*One of the most exclusive coffees in the world is known as civet coffee or kopi lawak, which sells for $120-$150 a pound. It is made from coffee seeds found in the droppings of a small mammal called the common palm civet, which lives in Indonesia.
at 3:35 pm