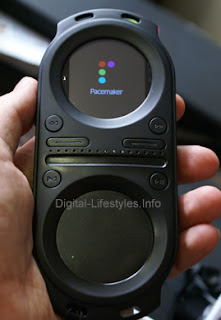 Check this baby out. This is the Pacemaker, designed by Swede Jonas Norberg.

The Pacemaker plays two high-quality audio streams at once, and with seperate volume, speed controls and a cross-fader, it allows tunes to be mixed with relative ease.

'The Pacemaker, priced at €520, or about $760, and created by a small Swedish company called Tonium, reduces the basic DJ equipment of dual players and mixer significantly. The Pacemaker has a 120-gigabyte hard drive, fits in the palm of the hand, runs on batteries and has a built-in mixer to layer tunes seamlessly so the music never stops.'

Tonium began shipping Pacemakers in February 2008. They are focusing first on customers in the European Union, Japan and South Korea, and then on the United States. American consumers will be able to order through www.pacemaker.net