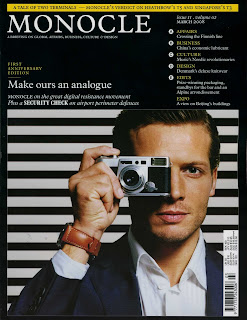 So we return to the consistently interesting magazine Monocle and their important story, in the March 2008 issue, on the future of photography, seen through the lens of the Japanese market. Here can be seen clearly the devastation of film and film cameras that the digital revolution has wrought.

'From a peak of nearly 40 million in 1997, sales of 35mm and single-lens cameras have plummeted. The situation is stark: if sales continue at this rate, film cameras and film itself will disappear within a few years.'

Last year Japan produced 94 million digital cameras and just 800,000 film cameras. Canon stopped developing film cameras in 2006. Nikon still makes some but its focus is digital. Konica was sold to Sony in 2005.
Over 50% of the 1,800 members of the Japan Professional Photographers Society are working in digital now. Bulk memory cameras are now standard in Japanese mobile phones.

Japan's greatest photographer Hiroshi Sugimoto is said to be stockpiling film in freezers; Sebastio Salgado is reported to have begged Fujifilm to manufacture film for him in bulk.

Fujifilm's President Sigetaka Komori is a fervent supporter of film photography. The company released the Klasse W, the one new film camera to come on the market since 2006, and, says Monocle, 'the consensus among photographers is that as long as Komori is in charge, the film is safe.' But he's 68 and will not be in the job for ever.

Taushi Horokawa is one of the most prominent of a group of pro photographers arguing for the value of film. He told Monocle: 'It doesn't matter hopw many pixels there are. Digital cameras can never becone like film cameras - they will always run in parallel, but never the same. There will be developments in digital technology and artists will use digital cameras in their work but film is something else, it has its own culture.' 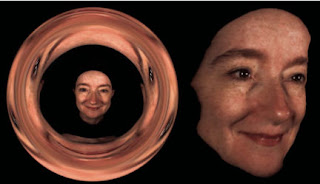 3-D FROM A DOUGHNUT. Photographing a person's face with a cone-shaped mirror in front of the lens creates a distorted, doughnut-shaped image (left). The cone provides two extra perspectives of the face on opposite sides of the center point, providing enough information to construct a 3-D model (right).
Image: Computer Vision Lab., Columbia Univ. From an excellent article in Science News.
If you recovered from that thought stream get ready for another photographic future: welcome to the new field of COMPUTATIONAL PHOTOGRAPHY. An excellent introductory primer on the subject, written by Brian Hayes, was published in the March/April 2008 issue of American Scientist. It begins:

'The digital camera has brought a revolutionary shift in the nature of photography, sweeping aside more than 150 years of technology based on the weird and wonderful photochemistry of silver halide crystals. Curiously, though, the camera itself has come through this transformation with remarkably little change. A digital camera has a silicon sensor where the film used to go, and there's a new display screen on the back, but the lens and shutter and the rest of the optical system work just as they always have, and so do most of the controls. The images that come out of the camera also look much the same—at least until you examine them microscopically.

'But further changes in the art and science of photography may be coming soon. Imaging laboratories are experimenting with cameras that don't merely digitize an image but also perform extensive computations on the image data. Some of the experiments seek to improve or augment current photographic practices, for example by boosting the dynamic range of an image (preserving detail in both the brightest and dimmest areas) or by increasing the depth of field (so that both near and far objects remain in focus). Other innovations would give the photographer control over factors such as motion blur. And the wildest ideas challenge the very notion of the photograph as a realistic representation. Future cameras might allow a photographer to record a scene and then alter the lighting or shift the point of view, or even insert fictitious objects. Or a camera might have a setting that would cause it to render images in the style of watercolors or pen-and-ink drawings.'

Check out the website of Ramesh Raskar, leading researcher in this field, based at the Mitsubishi Electric Research Laboratory.


On May 23 - 25, 2005, a Symposium on Computational Photography and Video was held at the MIT Computer Science and Artificial Intelligence Laboratory

Research breakthroughs in 2D image analysis/synthesis, coupled with the growth of digital photography as a practical and artistic medium, are creating a convergence between vision, graphics, and photography. A similar trend is occurring with digital video. At the same time, new sensing modalities and faster CPUs have given rise to new computational imaging techniques in many scientific disciplines. Finally, just as CAD/CAM and visualization were the driving markets for computer graphics research in the 1970s and 1980s, and entertainment and gaming are the driving markets today, a driving market 10 years from now will be consumer digital photography and video. In light of these trends, the time is right to hold a symposium on computational photography and video. The area is old enough that we understand what the symposium is about, young enough that we can still argue about it, old enough that its practioners can fill an auditorium, and young enough that they still fit in one.