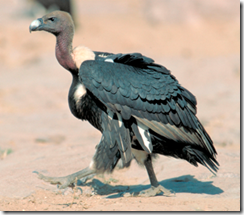 The Indian white-rumped vulture (Gyps bengalensis), a critically endangered species which has lost 99.9 percent of its population due to diclofenac poisoning. Source: Scientific American

One of the most important stories in Jane Goodall's book concerns the three species of now critically endangered Asian Vultures. At one time, India had the highest density of vultures anywhere - close to 87 million - and the highest number of cattle in the world - 900 million. The vultures did an efficient job of cleaning up the 10 million or so dead cattle per year. Then, in the 1990s, the vultures started dying in huge numbers. Their populations fell by 97 per cent in one decade. - one of the steepest declines experienced by any bird species.

In 2003 the culprit was identified - an anti-inflammatory pain-killing drug diclofenac used in veterinary medicine to treat colic in cattle. In vultures, it caused a deadly kidney ailment. This has now been banned, captive breeding sites for each species has been established, but the problems involved in saving these birds are immense.

In their absence, populations of feral dogs and rats have taken over their scavenging role and have multiplied in numbers, with subsequent effect on the human population, as both species carry rabies.

A 2007 study by the Bombay Natural History Society, a 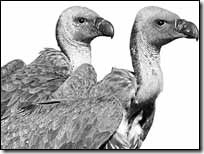 conservation group, estimated there were only about 11,000 white-backed, 1,000 slender-billed and 44,000 long-billed vultures left in the wild in India.

In December 2009, further problems were identified. A ban on diclofenac had led to a safe alternative being used - ketoprofen - which conservationists believed to be harmless to the birds. Now it seems that this drug also is lethal to vultures in large doses. Another drug, meloxicam, is now recommended as the safe alternative. [See: 'New drug threatens India's endangered vultures' by Elizabeth Roche (AFP)]

Vultures face extinction as gamblers seek visions of the future

Inhaling smoked vulture's brain confers gift of premonition, according to vendors of traditional medicine in parts of Africa. [The Guardian. 30th December 2009]