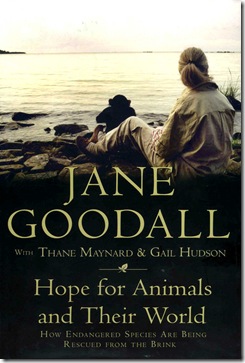 Jane Goodall is a woman with a mission. Most famous for her work for chimpanzees in the 1970s, she has devoted her life to nature conservation and  travels the world constantly, admonishing and encouraging lawmakers and politicians to do the right thing, energising and inspiring young people with a message of hope for the future.

Goodall (such an appropriate name) has four reasons for hope: 'our quite extraordinary intellect, the resilience of nature, the energy and commitment of informed young people who are empowered to act, and the indomitable human spirit.'

This book is a testament to these beliefs, profiling as it does numerous individuals who, by virtue of their extensive commitment and deep love for the creatures they are trying to help, have succeeded in rescuing endangered species from extinction, mainly through captive breeding.

Some have been re-established in the wild including the Californian Condor and Red Wolf in the USA, The Crested Ibis in China, the Golden Lion Tamarin in  Brazil, the Mala Hare-Wallaby in Australia. Others, such as the Iberian lynx and the Bactrian camel, and the giant panda, will only survive long-term if areas of natural habitat safe from human encroachment, are provided for their protection. 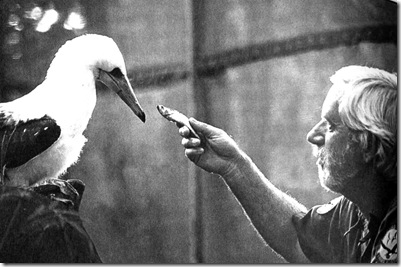 Christmas Island Park Manager Max Orchard and his wife Beverley have spent 16 years nurturing injured or orphaned Abbot's boobies. The numbers of these birds, which nestonly   on Christmas Island have declined dramatically due to phosphate mining destroying their habitat.

Another section looks at what the book calls 'The Heroic Struggle to Save Our Island Birds - the Black Robin in New Zealand, the Stellar Albatross in Japan and the birds of Mauritius amongst them.

This is followed by 'The Thrill of Discovery', which tells the stories of new species still being discovered and the rediscovery of species that were believed to be extinct, like the coelecanth and the Wollemi pine.

There are many fascinating stories like the successful efforts to teach young whooping cranes to migrate from Wisconsin to Florida by leading them on the route with a human in an ultralight aircraft. Jane Goodall talks about this on a video embedded in the book's complementary website which includes many other additional species survival stories.

Jane Goodall says she is often accused of being unrealistically optimistic. In fact, she deserves our thanks and praise for keeping hopes alive and inspiring millions of people the world over with her undinting efforts, to make us see the beauty and importance of nature and to encourage us all to do more to help preserve it.

'Hope for Animals and Their World' by Jane Goodall with Thane Maynard and Gail Hudson [Icon Books UK/£17.99]