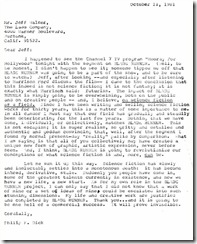 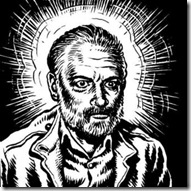 This post is really some sort of musing on the disappearance of letters and typewriters, prompted by three things:

- the discovery of the wonderful website Letters of Note . Its creator Shaun Usher says the site 'is an attempt to gather and sort fascinating letters, postcards, telegrams, faxes and memos.' Its a beautiful concept elegantly realised and highly recommended. [thanks to Bigfug] 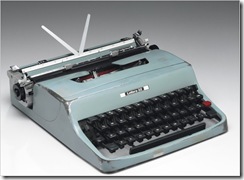 - the news that Cormac McCarthy's portable typewriter on which he wrote all his brilliant novels, is being auctioned today and is expected to reach some $20,000. He has had his Olivetti Lettera 32  since 1963 when he picked it up second-hand for $50 from a pawn shop in Knoxville, Tennessee. He claims to have written 5 million words on it during which time, he says, the only maintenance required was 'blowing out the dust with a service station hose.'  The replacement machine - another Olivetti bought by a friend of his for $11. See: No Country for Old Typewriters [New York Times]

- sorting through The Generalist Archive. In times past, one kept carbon copies of every single letter and article and I have them still. In addition, hundreds of handwritten often lengthy letters from friends and colleagues. Now, of course it is rare to get a handwritten letter. As I have discussed with other archivists, cataloguing e-mails is quite a problem. This poses a problem for future historians and biographers.

'Email is better for politics because it's more agressive. Handwriting for sex, I think.'

[Coincidentally or not, just after publishing this piece, whilst sorting through a large pile of newspaper clippings (yes, I am still clipping newspapers), came across the excellent piece by John Harris called 'The Last Post' on this very theme [The Guardian 13th October 2007]. After bemoaning the state of affairs, the article ends on the upbeat fact that in 2006, sales of pens and stationery in the UK had reached £546m (up 4% from the previous year). Now, of course, we have the additional concern about the fate of Royal Mail ! 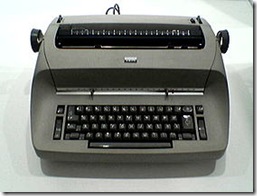 I am a member of one of the last generations who began their journalistic careers using typewriters. At one stage in the early 1970s we all invested in IBM golfball typewriters (first introduced in 1961) 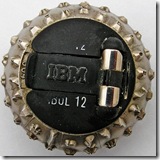 which were the cutting edge at the time. They cost literally thousands of pounds and were built like a tank. The small rotating typeball allowed you to change font styles within a document. Many years later, when I tried to sell it, I think I was offered £20 for it. 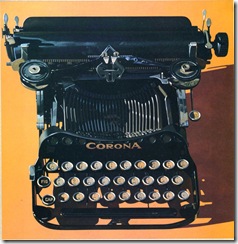 This is a picture I have on my wall - Corona by Robert Cottingham (1997), one of the leading painters of the US Photorealism movement.

According to Urban Dictionary, qwertyuiop - the top line of the keyboard- was the first "word " ever e-mailed It is also claims that the longest word you can make out of those letters is - 'typewriter' !!

According to Wikipedia, a popular story about the QWERTY layout is ' that it was designed and used for early typewriters exactly because it was so inefficient; it slowed a typist down so as to reduce the frequency of the typewriter's typebars wedging together and jamming the machine. 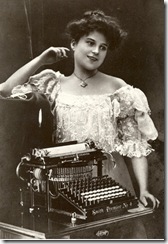 'Another story is that the QWERTY layout allowed early typewriter salesmen to impress their customers by being able to easily type out the example word "typewriter" without having learnt the full keyboard layout, because "typewriter" can be spelled purely on the top row of the keyboard.

The most likely explanation is that the QWERTY arrangement was designed to reduce the likelihood of internal clashing by placing commonly used combinations of letters farther from each other inside the machine. This allowed the user to type faster without jamming. Unfortunately, no definitive explanation for the QWERTY keyboard has been found, and typewriter aficionados continue to debate the issue.' 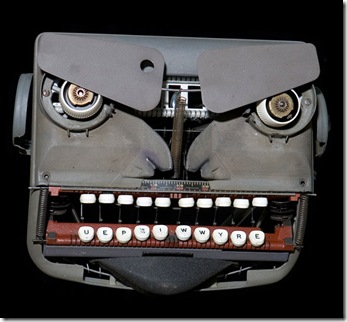