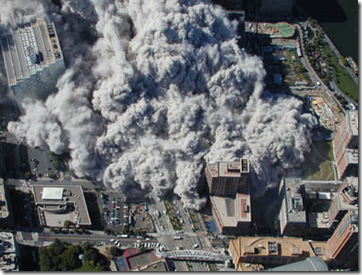 Back in September 2007 The Generalist reported the following: 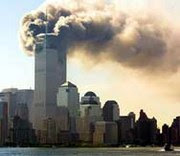 'The 9/11 Cover-Up: Thousands of New Yorkers were endangered by WTC debris—and government malfeasance', is the title of an article by Michael Mason, in a special issue of Discover magazine on the health effects of 9/11 on the people of the city. Issue also includes interview with Philip Landrigan, the doctor leading the research on this. Extract as follows:

Q: Your department is monitoring the health effects from the collapse of the World Trade Center. When the towers collapsed, two million tons of dust containing cement, asbestos, glass, lead, and carcinogens rained down on lower Manhattan. Yet less than a week later, the EPA said it was safe to go there and breathe the air. Now we know that erroneous assessment may have put thousands of people at risk for serious chronic health problems, and even death.


A: [EPA Director] Christine Todd Whitman's statement that the air in Manhattan was safe to breathe was stupid and ill-considered because she was making a very strong assertion with almost no data. I wondered how she could say this—it's like a doctor telling a patient that the patient is healthy before he's done any tests.'

HEAR US: Downtown Manhattan residents call on Presidential candidates to pay attention to post-9/11 health effects. Many who work and live south of 14th St. suffer some of the same symptoms as firefighters present at 9/11.