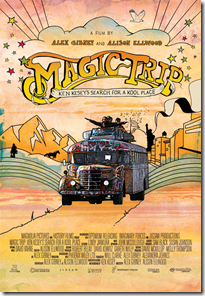 As some of you will probably know there is new movie ‘Magic Trip’ about the legendary 1964 coast-to-coast journey by Ken Kesey and the Merry Pranksters on board a psychedelic bus, driven by the legendary Neal Cassady, immortalised by Kerouac as Dean Moriarty in ‘On The Road.’ The movie is largely composed of 16mm footage shot at the time which has never been seen before. Filmmakers Alex Gibney and Alison Ellwood restored over 100 hours of film and audiotape. The movie is now out in the US from Magnolia Pictures and is expected on these shores before too long. You can read more about this movie in Edward Helmore’s article ‘How Ken Kesey’s LSD-fuelled bus trip created the psychedelic 60s.’ 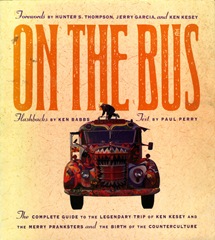 These two books are probably the best accounts around of that original bus trip. First Tom Wolfe’s classic piece of New Journalism ‘The Electric Kool-Aid Acid Test’ (my battered and smoke-stained 1969 Bantam paperback edition above). Second ‘On The Bus’ a fully illustrated documentary account by Paul Perry, with Flashbacks from Ken Babbs and Forewords by Hunter S. Thompson, Jerry Garcia and Ken Kesey, published by Thunder’s Mouth Press, New York in 1990. 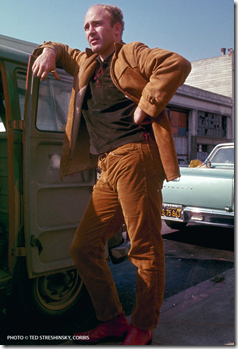