This is an account pieced together from The Generalist Archive and the memories of my friend and colleague David May, co-author of ‘The Brotherhood of Eternal Love’ [See Previous Post] of Kesey’s last visits to the UK before his death in 2001. 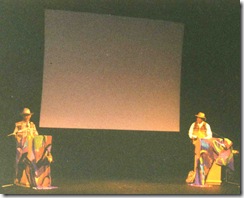 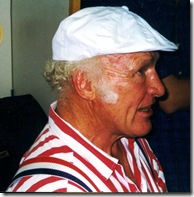 Our story begins in August 1998 when Ken Kesey and Ken Babbs appear at The Barbican as part of a GrandFurther Tour. I was working with a small APS camera at the time so the stage shot just gives an impression of the set-up – the two Kens behind separate lecterns on either side of a large screen, dressed in outfits that resembled psychedelic Morris Men.David May, who was working for David Brook at Channel 4 at that time, invited DB and me to the event and afterwards we went backstage, where the rest of the pics were taken. The bottom one shows me shaking hands with Kesey, who then signed my Calder & Boyars 1972 hardback edition of ‘One Flew Over The Cuckoo’s Nest.’

David Brook and Simon Jameson suggested there and then that Kesey should bring the bus over to Britain the following summer in the lead up to the Millennium, when there was to be a major solar eclipse.The basic deal was done that night.

David May went with journalist Mick Brown to Oregon to settle further details (Mick wrote a piece for The Telegraph magazine) and they spent July 4th with Kesey and Babbs and all the Merry Prankster’s who had gathered at Babb’s place for the celebration.

Note on the bus. This is picture of the original bus – a 1939 International Harvester school bus - still sitting on Kesey’s farm, from the official website run by Kesey’s son Zane ww.key-z.com.

At that time Ken Kesey had just published his own account of the original 1964 trip - ‘The Further Inquiry’, published by Viking Press – and to promote it, was staging another coast-to-coast ride in the new bus which, said Kesey, incorporated ‘important portions of the original “Further”…including the driver’s seat from which Neal Cassady…piloted the rolling affront to respectable behaviour on the first trip.’The article reports that, at that time, the Smithsonian was interested in obtaining the original bus and restoring it. For Kesey that was a no-go.The new bus was the one that was to make the trip to Britain.