The news of the death of the British artist Richard Hamilton came a few short weeks after I had been researching the roots of the Pop Art movement for a forthcoming book project. Its a fascinating story which took me a while to understand and piece together.

It begins with the little-known Independent Group (1952-55) whose history is documented in this excellent website.

‘The Independent Group looked at, discussed, analysed, wrote about, designed, built and assembled a galaxy of highly significant work exploring contemporary culture ‘as found’. Using a range of sources including the pages of science-fiction magazines, Jackson Pollock’s paintings, Hollywood film, helicopter design, the streets of London’s East End and modernist architecture the Independent Group created a radical approach to looking and working with visual culture.’ 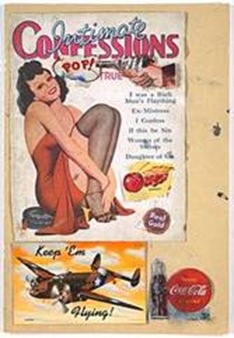 Their first meeting in 1952,  held at the Institute of Contemporary Arts in London, focused primarily on the imagery of popular American culture, particularly mass advertising. The co-founder of the group – artist and sculptor Eduardo Paolozzi – presented a lecture featuring a series of collages he had put together in Paris during 1947 and 1949 which he titled Bunk! This included this 1947 collage entitled I was a Rich Man’s Plaything which included the word POP.
According to Wikipedia:
‘Subsequent coinage of the complete term "pop art" was made by John McHale for the ensuing movement in 1954. "Pop art" as a moniker was then used in discussions by IG members in the Second Session of the IG in 1955, and the specific term "pop art" first appeared in published print in an article by IG members Alison and Peter Smithson in Arc, 1956. However, the term is often credited to British art critic/curator, Lawrence Alloway in a 1958 essay titled The Arts and the Mass Media, although the term he uses is "popular mass culture". Nevertheless, Alloway was one of the leading critics to defend the inclusion of the imagery found in mass culture in fine art.’ 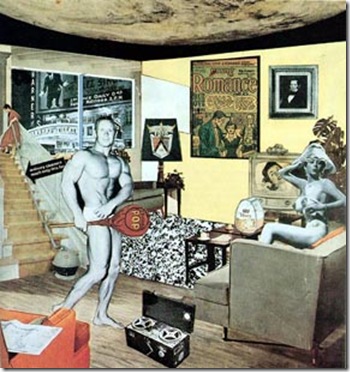 Paolozzi’s earlier contribution has become overshadowed by this image, Richard Hamilton’s collage Just What Is It That Makes Today’s Homes So Different, So Appealing, created in 1956 for the catalogue of an seminal exhibition entitled ‘This Is Tomorrow’ and used on the exhibition’s poster. The core of the exhibition was put together by the IG Group and was staged at London’s Whitechapel Art Gallery. A detailed analysis of all the elements that make up this collage can be found here. The original work is now in the Kunsthall Tubingen in Germany.
Around that time. Hamilton defined what Pop art meant to him:  "Popular (designed for a mass audience); transient (short-term solution); expendable (easily forgotten); low cost; mass produced; young (aimed at youth); witty; sexy; gimmicky; glamorous; and last but not least, Big Business."
The pioneering work of the  IG Group and of Richard Hamilton in particular laid the seeds for younger artists, principally Peter Blake. The launch of Pop Art in Britain is widely considered to be the January 1961 ‘Young Contemporaries’ Exhibition at the Royal College of Art, which established the reputations of Blake, David Hockney, R.B. Kitaj and their lesser-known contemporaries Peter Phillips, Allen Jones and Derek Boshier.
The term ‘pop music’ originated in Britain in the mid-1950s, referring to rock and roll. The marriage between Pop Music and Pop Art was consummated in 1967 with Peter Blake’s cover for the Beatles’ ‘Sgt Pepper’ album. He would go on to do covers for Paul Weller, Ian Drury and Oasis. The target, a symbol used by many Pop artists, became an iconic Mod symbol, rendered in red, white and blue. 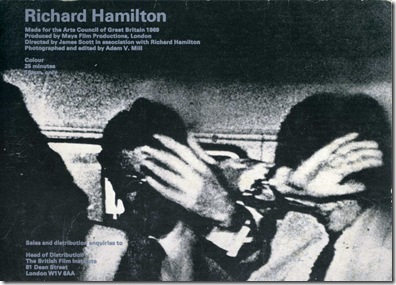 [Above: An original promotional card for a 25-minute film on Richard Hamilton, directed by James Scott and produced for the British Arts Council [Generalist Archive]
Richard Hamilton’s work also crossed over from Pop Art to Pop. Above is one of the iconic images of the 1960s. It shows a young Mick Jagger and the art dealer Robert Fraser handcuffed in the back of a police van during their trial for drug offences in 1967. According to a 1999 article by Jonathon Jones, Hamilton copied one of the photographs and turned it into an artwork ‘by adding real metal for the handcuffs and a replica of the police van’s window frame. The piece is now in the Tate Gallery. 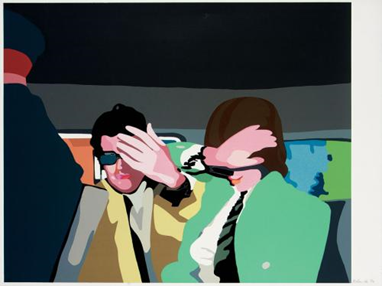 Richard Hamilton, Swingeing London III, 1972
This screenprint was sold by Sotheby’s in March 2006)for £64,800 . Source: www.thinkingmanagers.com
Hamilton later designed the cover for the Beatles’ ‘White Album’.