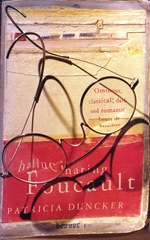 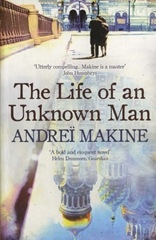 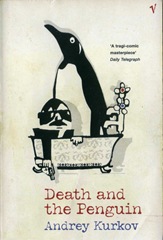 Hallucinating Foucault by Patricia Duncker, which I finished at 3 o’clock in the morning, is a wonderful, wonderful novel which I urge you to read. It concerns a young student doing her degree at Cambridge on a glamorous and scandalous French novelist named Paul Michel. Little does the protagonist and the reader know where this will lead and I intend to reveal little more than that as the book is full of genuine surprises. It touched me deeply.

The Life of an Unknown Man  by Andrei Makine is of similar rank. This story begins in Paris with a Russian writer in exile whose girlfriend has just left him. In some despair, he decides to return to St Petersburg only to discover both the New Russia and the dark secrets of the past. This is very strong meat indeed, once again full of unexpected developments. It will bring you to tears. Makine is a wonderful novelist with a whole body of work worth exploring.

Death and the Penguin by Andrey Kurkov is a grand example of that strand of Russian literature which combines the dark and the absurd. How is this for a set-up. Once again we have a lonely writer whose girlfriend has left him. The zoo was giving hungry animals away to anyone able to feed them so Viktor adopted a king penguin he names Misha, to keep him company. From such strange beginnings, Kurkov creates a tale of humour which becomes overshadowed by menace and tragedy. Not a happy read but an intriguing one.