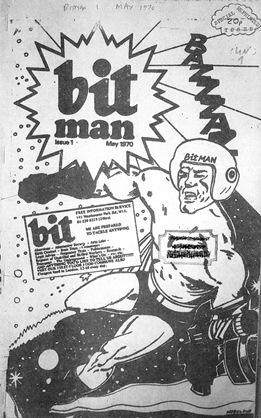 THE GENERALIST ARCHIVE has also received from Gian Paolo Chiari a rare copy of BITMAN 1, dated May 1970 – a 40pp mimeographed and stapled publication. The intro explains all:
BITMAN is the degenerate offspring of BIT which disclaims all parental responsibility.
BITMAN is sure that words are confusion but will not fight off words that go to make up necessary bits of INFORMATION such as those which help make contacts & build circuits & blow minds & get projects off the ground.

BITMAN
(a) will report on the various activities of BIT Information Service as it develops.
(b) will print out some of the more valuable information that flow through the BIT office,
(c) and primarily, will carry INFORMATION on the growth of alternative structures in this country +
(d) occasional reprints of articles from the alternative media of other countries.
BIT is the June 1968 brainwave of Hoppy in jail and the name is to indicate that BIT evolved out of International Times (IT) - (as did FIT, the Free Bank, and other ITs + prefixes yet to materialise – though BIT also = Binary Information Transfer, “the smallest unit of information that can be processed by a computer”, in memory of the original aim of computerising the service.
BIT is a free information service run by its dozen or so workers (two of whom were paid till the money ran out at the beginning of April). It is in urgent need of information freaks – people who treasure good information, love filing and are prepared to work fo9r free, at least for the time being. The office and the food commune (“cheapest food in London”) are open from 10 to 10 each day.
Contents includes the following:
Galactic Medical Services
Claimants Revolt
Social/Legal/Welfare Information & Comment
Pregnancy Testing
Legal Aid
Days In The Life of A Hole
Jail Interview: Charles Manson
Alternatives/Utopianism
Eel Pie Island
Children of the Rocks/Bedouins in Maida Vale
Rhombicosidodecadomes & Other Domes
Organic Farming
Arts & Crafts Directory
Progressive Schools
Alternative and Political Periodicals
BITS/Switchboards in the States
Hallucinogenic Mushrooms
FOR MORE INFORMATION ON BIT SEE THESE PREVIOUS POSTS
ALTERNATIVE SOCIETY 1970s: BIT by bit
ALTERNATIVE SOCIETY 1970s: BIT Travel Guide
ALTERNATIVE SOCIETY 1970s: Arts Labs
ALTERNATIVE SOCIETY 1970s: Nicholas Albery
ALTERNATIVE SOCIETY 1970s: FEEDBACK
at 4:50 pm