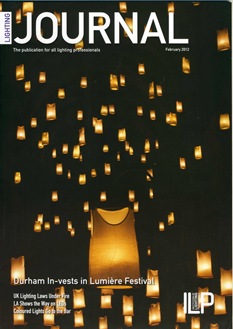 Back in 2008, I briefly became a 'virtual expert' on the subject of energy-efficient lighting when I was hired by the Professional Lighting Designers Association (PLDA) to work on a campaign to question plans by the EU to ban incandescent light bulbs. [See Previous Post: ENERGY EFFICIENT LIGHTING: THE INCANDESCENT STRIKES BACK]
My interest in the subject has been revived following conversations with independent lighting designer Graham Festenstein who has introduced me to the work of another UK trade body  The Institution of Lighting Professionals (ILP) whose members are principally concerned with street lighting. Graham also lent me copies of their official quarterly publication Lighting Journal which makes interesting reading. Here are some of the things I learnt from it. 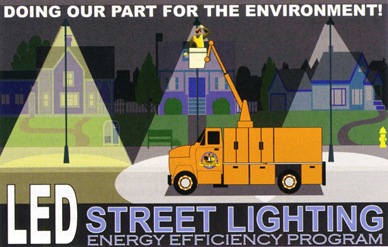 One of the biggest developments in street lighting is the switch-over to using LEDs in the interests of energy efficiency and CO2 savings. A most interesting case study of this is the mammoth fast-track replacement being carried out by the Bureau of Street Lighting in Los Angeles.

Los Angeles is the second largest city in America, sprawling across 472 square miles. It contains some 6500 miles of roads and streets of which 4,500 are illuminated. Leaving aside the numerous freeways that run through the city, which are managed by the State of California, LA has some 210,000 street lights encompassing 400 different styles of lantern; the vast majority however are modern ‘cobra-head’ fittings and it was 140,000 of these – situated on residential and city centre streets and secondary routes that were selected for replacement.
This five-year project, due for completion in 2013, will cost $57m (£37 million). It will save 40,500 tons of CO2 per annum and achieve energy savings of 68m kWh. At the end of 2010 the project was ahead of schedule and was already achieving a higher level of savings than originally estimated. This means that the scheme will effectively pay for itself by 2015.

According to the Journal the new LED lighting is linked to ‘a remote monitoring system, which allows the acquisition of centralised information on energy consumption, malfunctions, outages and so on..’
One of the considerable advantages the LA programme had was scale, which meant they were able to negotiate a good deal with suppliers, paying $250 (£160) per lantern, down from an original price of $400 (£260).
For latest details see the LA Bureau of Street Lighting website
The Journal reports that to achieve similar savings, London’s 32 boroughs would have to club together to mass purchase LEDs. This would probably be impossible because of the different lighting specification policies between boroughs.
Birmingham, the largest local authority in Europe, is the only council in the UK to have successfully mounted a large-scale LED retro-fit programme on a short time-scale. Birmingham currently has more than 95,000 street lights, of which 41,000 will be replaced by 2015, producing a 50% cut in energy use and CO2 emissions. 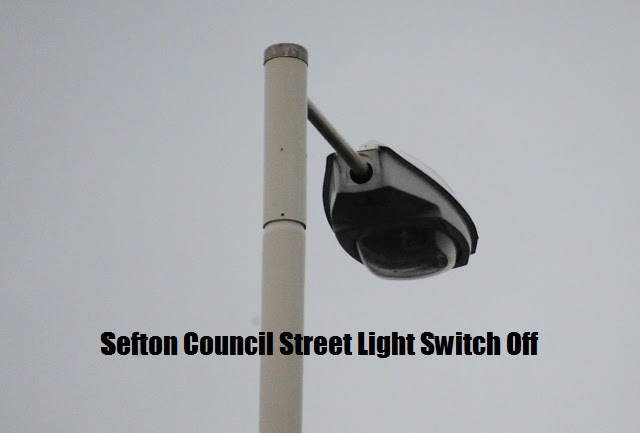 www.bbc.co.uk/news/uk-england...yside-15473810
Another issue that the Journal highlights is the fact that, according to a survey by the Daily Telegraph, a high percentage of local authorities in the UK are switching off their street lights (or are thinking about it) as a cost-cutting measure due to the fact that their energy bills have doubled in the last few years.
This is not a strategy favoured by the ILP. They have produced an excellent document which argues the case in favour of adopting alternative energy efficiency strategies and against such switch-offs. You can download the pdf here: Street Lighting – Invest To Save

Modern street lighting provides many benefits to the community from reduced road accidents to reductions in street crime and the fear of it.

Recent increases in the cost of electrical energy have caused local authorities to review their policy on the provision, operation and maintenance of street lighting to try and minimise these increases.

The initial view of the many local authorities is to reduce energy cost by switching off or operating street lighting for shorter periods.  Whilst this may provide short term relief in energy cost it takes no account of the hidden increases to the community in increased calls on the emergency services and the disruption of people’s life styles as well as a decrease in the use of public transport due to an increase in people’s fear of walking to and from it on dark streets.
The direct and indirect costs associated with switching off street lighting also need to be taken into account when making such decisions.

This advice note recognises the need to review energy costs and the provision of street lighting; however it aims to suggest alternative proposals which will keep the street lighting lit whilst helping to reduce costs.

There have been protests and concerns about the proposed switch-offs cross the country.
40,000 lights set to go out across our streets/Yorkshire Post 9 June 2012
Is Britain Returning to the Dark Ages ?/Lighting.com
Guerrilla Electricians plan to restore street lights in Northampton/Lighting.co.uk
Corby Protest Over Street Lights Switch-Off/BBC News 23 May 2011

Another interesting article in the Journal is  ‘Making the Connection between Electric Cars and Street lights’ by Andrea Williams. She writes that ‘the main stumbling block for the electric car market is one of the availability of charging places.’

One solution to this is proposed by Phil Bailey of Minos Systems – to use street lights as the base for car charging points. He says: ‘The beauty of our system is that it draws energy from the main electricity grid, use existing columns and doesn’t require any disruption to services. There is simply no need to dig up roads and install a new infrastructure.’ Minos is working with a company called Changing Solutions to create ‘a smart system that will allow local councils to eventually charge for the use of the charge points with swipe card system or metering.’
* 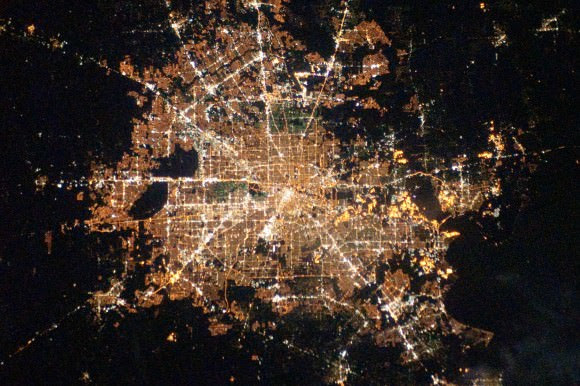 Here’s a nice view of Houston, Texas at night as seen from the International Space Station on February 28, 2010. This photo was taken by the crew member of the Expedition 22 mission. Houston, Texas is the world’s energy capital.
Read more: http://www.universetoday.com/41702/picture-of-earth-from-space/#ixzz1xIm3CU7j
Another important issue that threads its way through the Journal is light pollution. I was interested to read that the Exmoor National Park has been awarded the designation of International Dark Sky Reserve by the International Dark-Sky Association which, for more than 20 years, has been pioneering activities to address this growing problem.
The Generalist has signed the following e-petition: http://epetitions.direct.gov.uk/petitions/27603

Responsible department: Department for Transport
The night sky has inspired humanity for thousands of years. Our myths are built on it. We have learned to navigate the globe by it. Science has progressed because of it. Studying it had shown us our place in the universe and led to more stories, spiritual, philosophical, religious, social and emotional revolutions than any other part of our world. And yet every town and city in the country destroys it with light pollution.
This petition calls on government to give official support to the Campaign for Dark Skies, and grant the night sky the status of a Site of Special Scientific Interest (SSSI) and/or an Area of Outstanding Natural Beauty (AONB), and to support this status with a major energy efficiency strategy of re-configuring street lighting to protect the sky while meeting crime and safety objectives.

You can download the ILPs Guidance for the Reduction of Obtrusive Light here.
Also check out: www.lightpollution.org.uk
at 3:16 pm

Really nice post Excellent Information to all . and brilliant thoughts i am very happy to read your post and i hope you will update like this kind of information . Thanks for Sharing such a wonder Full Post...Thanks
http://www.sepicn.com/

Cool post. I was in fact looking for something like this and you made it easy for me :)