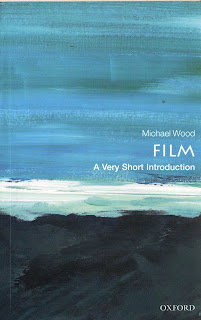 This is the 300th title in Oxford University Press’s excellent ‘Very Short Introduction’ series of pocket books. [Have previously reviewed MEMORY and am planning to tackle ISLAM next]I have been fidgeting with this book for several weeks. Initially I found it strange and bewildering, pretentious and exasperating. I have ended up full of admiration for what is one of the most unusual books I have ever read on film.

Its author Michael Wood is Charles Barnwell Straut Professor of English and Professor of Comparative Literature at Princeton University. He has form in this field having previously authored ‘America in the Movies’ and a book on Luis Bunuel.


In his intro (entitled ‘Before the Titles’) he apologises for the absences – the people and films that are not in the book – and the larger absence of films from around the world – the book principally covers North American, European and Japanese cinema. He writes:


‘Of course it is impossible to survey or summarize the world of film, and I have not tried. But I hope it is possible to open up questions about what has been happening to the medium and through the medium, about what it is like to have learned to take for granted what once seemed to be a miracle: images of life possessing the movement of life itself. We must be seeing things.’

In just three chapters and a scant 114pp, Wood succeeds in making us think in new ways. In fact the book fizzes with thought-provoking facts, ideas, theories and concepts which will help you think anew about not only the process of film-making but also film-watching which, he says, taken together, are more than an art form – rather ‘an institution, an enterprise and a cultural ritual rolled into one.’

Chapter 1 entitled ‘Moving Pictures’ straight away messes with your mind. Wood writes: ‘During the projection of a film, the spectator is sitting in darkness for almost 40% of the running time’ made up of ‘the swift patches of darkness between frames’ which the brain edits out.’

Reality, he writes, ‘is recorded by the eyes, so to speak, and composed bv the brain…the eye ‘snaps’ and the brain assembles the stills to create the illusion of a continuous world.’

Wood discusses the fact that us humans have an obsession with realism and with reproductions of the real - ‘mimesis’ – which he describes as both ‘a primary instinct and a universal pleasure.’

He goes on to sketch out the development of film, the parameters of which were set by pioneer Lumière brothers and George Méliès– realism on the one hand, magic on the other. Incidentally, the Lumières thought film had no commercial value whilst Méliès thought it would be limited to a ‘fancy act in a larger show.’

Wood is particularly interesting about the the evolution of the language and grammar of film as filmmakers learnt how to edit and juxtapose shots in time and space – through such techniques as close-ups, parallel editing, shot-countershot and cross-cutting – the latter, Wood says, was invented by Flaubert in ‘Madame Bovary.’

In Chapter 2 ‘Trusting the Image’ he tells us that cinephiles think about directors whilst moviegoers concentrate on the actors and asks: Can Warren Beatty really have slept with 12,775 women?

This chapter is peppered by more detailed studies of a number of select films including Satyajit Ray’s ‘Chess Players’ Alan Resnais’ ‘Night as Fog’ , Robert Zemeckis’ ‘Who Framed Roger Rabbit’ and Kurosawa’s ‘The Hidden Fortress’ – which features two clowns who, Wood claims, were the models for R2D2 and C3PO.

In Chapter 3 ‘The Colour of Money he discusses, amongst other things, genres (focusing on westerns, gangster films and musicals) and the rise and potential death of the cinema as we know it.

Cinema attendance in the US peaked in 1946/47 when there were 20,000 cinemas and 100m ticket sold. By 1959, the number of cinemas had dropped to 11,000 and have continued to decline. His message is that even the multiplexes will fade away and we are looking at a future without the ‘old experience of cinema’ as we become ‘a little more digital each day.’

Wood concludes with a list of ‘Around the World in 80 Films’ and you can check out his top ten favourite books on film in this Guardian piece.
at 1:50 pm