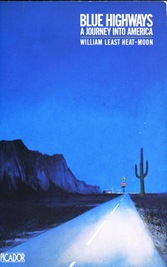 Travel literature is one of my favourite forms of reading and they don’t come much better than ‘Blue HIghways’ a book to savour and linger over.

Its author William Least Heat Moon sets off in his camper van Ghost Dancing to make a lengthy and eccentric journey travelling the blue highways (B-roads) of America, recording his experiences in meticulous and luminous prose. He has a penchant for towns with bizarre names (his favourite is Nameless, Tennessee) and for diners and bars that have been untouched by the modern world. 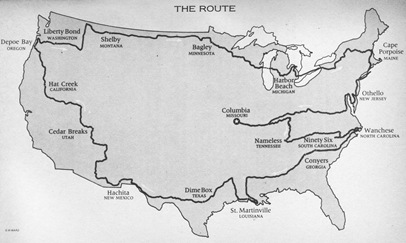 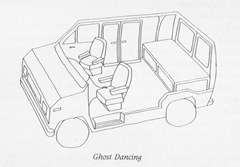 In the process he meets more than a hundred characters who he profiles (and in many instances photographs)with great vividness and skill, capturing their life stories and conversation. He is a consummate stylist as well as a fine observer of nature and landscape, bringing to life the unbelievable diversity and vastness of America’s great landmass.

The story behind the book is interesting. William Trogdon, born 1939 of English/Osage ancestry was in a hole. He’d acquired a doctorate in English literature but had lost his job and his marriage had broken down, which meant he’d also lost the house he’d just rebuilt. So in the spring of 1978, he set off to escape, to find himself and a new angle of vision. He took only two books with him: Walt Whitman’s Leaves of Grass and Black Elk Speaks.

In the latter, Black Elk talks about the blue roads of a person’s life as being ‘those roads that are destructive to human understanding and human co-operation..largely travelled by people preoccupied with themselves.’

On his three month 13,3889 mile journey, William Trogdon rediscovered his Osage heritage and reverted back to his Least Heat-Moon birth name. For him the journey became an Indian vision quest in which he became less withdrawn and opened himself up to the world and the people he found there.

‘Blue Highways’ was his first book and took eight drafts and four years to write. It was widely rejected by publishers but it entered the New York Times best-seller lists shortly after publication in 1983 and has subsequently sold some 2 million copies.

The Road to Serendipity: An Interview with William Least Heat-Moon by Hank Nuwer.

‘In Depth with William Heat Moon’ is an excellent and lengthy video interview, conducted in August 2005

List of books and other audio interviews on Wikipedia.

‘Crazy Weather’, originally published in 1944, was the only book-length piece of fiction written by Charles L. McNichols, a former naval aviator in World War i who later worked in the movies and wrote for magazines. Often compared to Huckelberry Finn, its a great tale of South Boy, a sensitive young mixed-blood who goes off on a great four-day adventure with his young Mojave friend Havek to prove their manhood as warriors. Its a beautifully written tale which gives great insight into Mojave culture as well as conjuring up breathtaking landscapes and intriguing plot turns.


The beautiful cover of this University of Nebraska Press edition is a section from this amazing ‘Cloud World’ painting by Maynard Dixon. See more of his works here.
at 3:13 pm