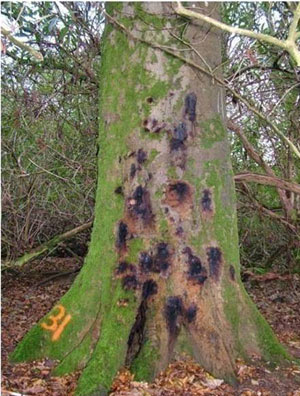 The recognisable sign of a P. ramorum infection in broadleaved trees is large brown-black cankers on the lower portion of the trunk that seep dark-red sap. Source: Woodlands.co.uk

Eight years ago, the magazine I edited Tree News was the first in Britain to feature a major story on the spread of a microscopic pathogen Phytophthora ramorum,which, at that time, had already infected several species of oak in California and Oregon causing 'Sudden Oak Death' and which had just been detected for the first time on trees in Britain. The worry then was that this could devastate our native oaks.


I conducted interviews with leading experts in the UK and US including Professor Clive Brazier, an emeritus mycologist who was the co-discoverer of the new strain of Dutch Elm disease in the 1970s. He told me: "Phytophthoras are potentially threatening the health of trees and the stability of woods, forests and ecosystems worldwide."


A few days ago, The Generalist was sent a press release from the Forestry Commission to say a new strain of Phytophthora has just been identified in the UK. In this post, I reprint the intro from the original news feature, which provides a good summary of the background story, followed by the latest developments.

Phytophthora ramorum is one of a genus of some 60 species which attack a vast number of plants including soybean, cacao, strawberries, pineapples, avocados and forest trees. (The Irish potato famine of 1845 was due to potato blight caused by Phytophthora infestans.) The name Phytophthora derives from the Greek and means 'plant destroyer'. Disease caused by Phytophthoras costs agricul­ture, forestry and nursery industries hundreds of billions of dol­lars each year in the US alone.


Phytophthora pathogens are especially difficult to control because of their origins. They come from an entirely different kingdom of life (Protista) to most other plant pathogens and are impervious to most pesticides. The organisms, though fungus-like, are not plant or animal, neither bacterium or virus, nor fungus or algae. They spread easily through air, water and soil.


Global trade in plants and forest products means that there has been what Clive Brasier describes as 'an increasing international spread of Phytophthora pathogens, by man, over the last 200 years'. This has introduced Phytophthora pathogens to new habi­tats and hosts that have not evolved any resistance to them, with damaging, even devastating, results.


Equally significant are the discoveries, over the last ten years, of six new plant pathogens that are all fungal hybrids; these include a new species of Phytophthora and the Dutch elm disease pathogen. Before 1990, records of natural species hybrids in fungi were rare, with fewer than ten clear examples known.


There is a greater possibility of hybridisation when fungi spread beyond their normal geographical ranges. Such accidental hybridisations open the door to the emergence of new diseases, capable of posing threats we cannot yet identify. Computer modelling shows that conditions favourable for Phytophthora attacks on forests are likely to become more common as global warming progresses.

*
FOR MORE ON THE CURRENT SITUATION READ ON

Helicopter surveys are being used to try and spot P. ramorum outbreaks in the UK. Source: 4Scapes.com

The potential threat to the UK's native oak species (Quercus robur and Q. petraea) has not materialised. These species have been little affected by P. ramorum.

However, it has caused dramatic mortality of Japanese larch (Larix kaempferi) in various part of the UK including Northern Ireland and many western parts of Great Britain, especially southwest and north-west England, south Wales and southwest Scotland. As a result, more than 3 million larch trees have been compulsorily felled to date in an effort to bring the disease under control.

Research has shown that larch trees produce huge numbers of the infective spores of P. ramorum, which can be spead some distance from tall trees on the wind and in mists.

The increasing intensity of the P. ramorum outbreaks in the UK led researchers to analyze samples which resulted in the discovery of a fourth genetically distinct lineage of the pathogen, dubbed EU2.


Three P. ramorum lineages were known to exist before the discovery: EU1 and North American types 1 and 2 (NA1 and NA2).

The EU1 lineage has primarily been found in European nurseries and forests, and has caused the current epidemic on larch throughout much of Great Britain. It has also been recovered from several US West Coast nurseries and waterways.

Phytophthora ramorum is currently affecting coast live oak, California black oak, Shreve’s oak, canyon live oak and tanoak in 14 coastal counties from Monterey to Humboldt as well as Curry County, Oregon. To date in California, more than a million trees have died and at least another million are infected. It also affects nearly 125 other plant species worldwide, including garden plants such as rhododendron.

Based on genetic analysis, these three lineages are considered separate, unique introductions, with each estimated to have arrived in its primary country during the 1990s.

Research on the four lineages indicates that the pathogen emanates from some unknown centre of origin. Each is a distant relative of the others, having diverged hundreds of thousands of years ago. The worry is that the global trade in plants could result in a co-mingling of these lineages, increasing the potential for sexual recombination, possibly creating more virulent strains.

According to Prof. Brazier: "This pathogen has been moved around the world and introduced into Europe and North America at least four times, and the likely vehicle for these introductions is nursery stock," Professor Brasier said.

Further information about the disease in the USA is available from www.suddenoakdeath.org; in Great Britain at www.forestry.gov.uk/pramorum;