Tuesday 17 July 2012 20:58
Three protestors who stormed a drilling site in a protest against fracking have been found guilty of aggravated trespass.Lauren Pepperell, 26, and Edward Lloyd-Davis, 38, scaled a pipe rack at the Cuadrilla Resources site in Bonny Barn Lane, Banks, and hung a banner in protest to the technology being explored at the site.
Barbara Cookson, 61, also went on to the site in the early hours of November 2 last year and along with Lloyd-Davis has also been found guilty of assaulting a security guard who tried to stop them.
All three defendants have been handed two-year  conditional discharges and ordered to pay £750 towards prosecution costs after District Judge Peter Ward said there was a long history of “civil disobedience” in a democratic society. [Source: Lancashire Evening Post] 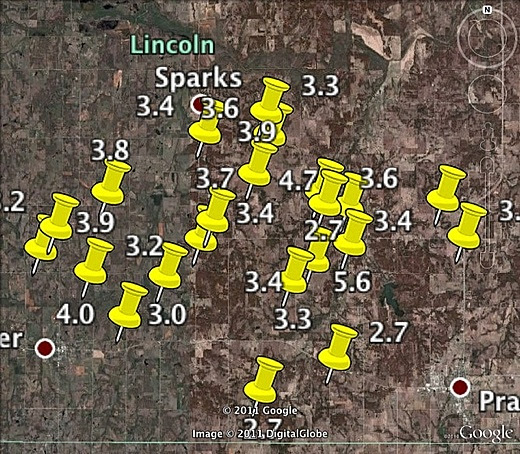 Image above: GoogleEath image of quake locations around Lincoln, Oklahoma. From (http://www.flickr.com/photos/kelley_mcdonald/6319498888/in/photostream/). Source: Island Breath blog
When kelleymcd (an anti-fracking activist) uploaded the above image to Flickr in November 2011, he/she noted that it showed:

"earthquakes in Central Oklahoma over the past 36 hours. Another 3.3 happened while I was making this image. This patch is 10 miles x 14 miles in size. Then 5 more aftershocks in the 3.0 range since that."

Kelleymcd clearly attributed the large amount of earthquakes to recent drilling activity—and not without reason. The US Geological Survey (USGS)had already linked 50 Oklahoma earthquakes to fracking, and a British fracking operation had recently fessed up to causing earthquakes in England.

Sean Lennon and Yoko Ono have created  Artists Against Fracking
They have gained the support of 120 artists including  Leonardo DiCaprio, Mark Ruffalo and Julianne Moore, musicians such as Lady Gaga, producer Mark Ronson and The Strokes, and other celebrities like spiritual guru Deepak Chopra and author Salman Rushdie.

Not everyone is against fracking, See: