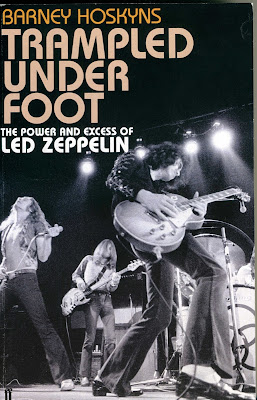 'One of the reasons people feel there is something satanic about the lure of their music is because its very primal - what it did to your head and the way it captured you. With the Stones, I thought about sex; with Zeppelin you felt....danger'
- Bebe Buell, celebrated rock consort and girlfriend of Jimmy Page


THE GENERALIST makes no claims to being a Led Zep expert but I was there at the time.

I played their first album virtually the day it came out at a gig I was DJing for at the old Hotel on Eel Pie Island.

I saw them at the 1970 Bath Festival whilst sitting in a tent with about seven heavy trippers and catching a contact high. They headlined on Sunday 28th June. Also on the bill that day: Frank Zappa and The Mothers, Moody Blues, Byrds, Santana, Flock, Dr John, Country Joe and Hot Tuna.

I was also there at one of the two simultaneous premieres in London for their film 'The Song Remains The Same'. They entered the balcony area and the whole audience stood up - except me and my mates. It all seemed a bit pompous at the time -  the film certainly was.


This book tells in unprecedented detail, the story of Led Zep, a monstrous rock construction, carefully designed and built to conquer America. Which they did, in a series of lightning raids that elevated them to rock god status - outselling the Stones. Yet mysterious: no singles, no tv appearances, no press. Protected by a man-mountain of a manager and an agressive and powerful 'connected' music lawyer, and handled by the best booking agency in America and Ahmet Ertegun at Atlantic Records, they unleashed their thunderous magic and captured the heart and soul of working-class kids in America, who didn't give a dog turd what Rolling Stone said. They worked it like a military operation, reaching stratospheric heights before the exhaustion kicked in - and the road madness - the drugs, the girls, the mayhem, the violence. In retrospect, ironic that the first Zep album featured the Hindenburg crash on the cover.


To date, the biggest-selling book on Led Zep is 'Hammer of the Gods' by Stephen Davis -  a book, as I understand it, largely based on the memories of Richard Cole, the band's long-time frighteningly agressive tour manager who, after long years of service for relatively modest return was summarily dumped by the band. The story is well told and has helped establish and embellish the mythological status of the band, peppered as it is with hair-raising rock tales and salacious incidents.


This new fat and heavy 550pp+ tome by Barney Hoskyns has these too but its a dark horse of a different order. Firstly its form: an oral history almost entirely based on first-hand quotes from more than 200 witnesses and the principals themselves. The ones who are dead are represented by referenced quotes from the past; the living were assiduously tracked down by Barney and interviewed by phone or in person. It makes me tired just thinking about the work involved in stitching the cut-up transcripts into a seamless narrative.


The structure of the book works: - a great  lick-your lips come-on intro, two chapters pre-Zep, the rise and fall of the band (the bulk of the narrative), ending with the adventures of Page and Plant following John Bonham's death.


Pre-Zep is good stuff. One chapter focuses on Page's rapid rise to becoming the hottest session guitarist around and his adventures with the Yardbirds + the background story to John Paul Jones, also a remarkable session man, multi-instrumentalist, genius musical arranger. For the rest of the book, Jones is virtually absent, a shadow figure but, as Barney makes clear, one who made a major musical contribution to the Led Zep sound. The other charts the interesting Birmingham music scene of the time and Plant and Bonham's musical adventures and background.


The multi-voice narrative throughout is full of contradictions. Was Peter Grant a psychopathic monster or a sad charming man with a frightening appearance. Was Page really into practicing Crowleyesque magic and was he the dark manipulative heart of the band or a nice quiet sweet-natured almost feminine figure. Was John Bonham an out-of-control physically abusive liability or a homesick sweetie who loved his prize bulls and hated flying. By all accounts Planty was a babe magnet but is he as distanced from all the bad behaviour as he would like to make out. Make up your own mind.


Zeppelin's saga is part Spinal Tap, part Good Fellas, part Fear and Loathing and part Dante. Quote after quote emphasises the total overwhelming magnificence and power of their best live performances alongside the olympian drug-taking, pre-pubescent sleaze, physical violence and a body count of those who couldn't keep up the pace or who were summarily dismissed as surplus to requirements. Its a mighty Machiavellian tale which would have been to Caligula's taste.


Happily Barney balances all the mayhem with valuable insights into the actual music making, explaining in some detail how they developed their sound which combined Bonham's huge prowess as a drummer, Page and Jones' complete mastery of their instruments, an Plant's impressive vocal style into complex material that ranged from Delta Blues to Tolkeinesque prog, Moroccan ragas to Welsh folk, the heaviest of metal to the most ethereal of acoustic soundscapes,


There's also valuable material on Zep's relationship to the punk scene and on the story of their Swan Song record label which unleashed Bad Company to huge success but failed to deliver for Maggie Bell and Dave Edmunds. Interesting stuff also on Roy Harper and his relationship to the band -  a 'crucial chum'.

The post-Zep stuff is also of interest as it documents Plant's constant search for a musical way forward, leading to his major hit album with Allison Krause, in the process of which his relationship with Page shifts to one of equals. Surprised that there is no mention of Page's painstaking remastering and reissuing of  Led Zep's back catalogue which introduced their work to yet another new generation.


'Trampled Under Foot' is a remarkable chronicle which adds considerably not only to our knowledge of the band but also to our understanding of what went down in those dark unhinged days of the 1970s. Its a book haunted by the voices of the living and the dead who took that flight to the highest apex of Rock Olympia only to discover a dark vaccuum that led, in so many cases, to paranoia, complete exhaustion, drug-soaked madness and total addiction.


The sun came out, the book arrived and I devoured it in two big chunks over two days during which it became my reality. So its readable and addictive. Its also a roller-coaster ride of emotions which leads you inevitably and quite rightly back to the music itself. And the wonder of it all.


'Trampled Under Foot' by Barney Hoskyns is published by Faber & Faber on September 6th 2012.


PS: I do have one ancedote to add to the historical record. As Dick Tracy working for the NME, I wrote a story about this punk band in California who'd had the temerity to record and put out on some itty bitty label a punk version of 'Stairway to Heaven'. As a result the entire weight of the Zep legal apparatus landed on their shoulders. Investigating this, I put in a call to Zep's manager Peter Grant. No response for several days.


Then, late one night, when I was working away in our little rented house in the Cotswolds, the phone rang. It was the dark voice of Peter Grant - intimidating from the start. I can't remember the gist of the conversation but I do remember how it ended. Grant suddenly said: 'I've got to go now. My rabbit's just died of Myxomatosis.'

[I then spent several hours trawling through my NME Archive but could not find either a printed or original typescript version of this story. Happily thanks to the great blog 'The Devil's Music' all is revealed. The band was Roger and the Goosebumps, a pop/rock band from San Francisco active during the 1970s and early 1980s and resurrected in 2006. The band is best known for its single "Gilligan's Island (Stairway)", a song combining the lyrics to the theme song of the television show Gilligan's Island with the music of "Stairway to Heaven". Led Zep did put their lawyers on to them. Read more on the site, where you can actually see a pic of the original single and listen to it. By the way Plant has since gone on record as saying that it's his favourite cover version of 'Stairway.']