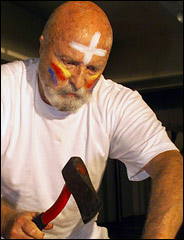 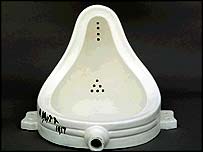 'Fountain' - the notorious 1917 artwork by Marcel Duchamp - a standard porcelain urinal exhibited upside-down, was attacked for the second time on January 4th by the same person – a 77-year old French artist from Provence named Pierre Pinoncelli.

Police said the first attack came at an exhibition in Nimes in 1993 when Pinoncelli urinated in the urinal and set about it with a blunt instrument, claiming that his attack was a work of performance art that Duchamp would have appreciated. At his trial, he said that he was ‘restoring dignity to this object, victim of an abuse of purpose if not of personality.’ The judge decided Pinoncelli had wanted to ‘hijack the fame of the original artist’, jailed hjim for a month and fined him €45,000.

This time, Pinoncelli hit 'Fountain', worth £2m, with a hammer, chipping it slightly. The piece was on display at a Dada exhibition at the Pompidou Centre in Paris. Pinoncelli was held by the police overnight. He was released on Thursday and ordered to appear in court in Paris Jan. 24 to answer charges of damaging the property of others. As in 1993, he could face a prison term or a fine.

According to a New York Times story on the incident: 'Since the early 1960's, Mr. Pinoncelli, based in Nice, has been busy with what he calls "les happenings de rue," or "street happenings." In 1969, he used a water pistol to spray red paint on André Malraux, who was then the French culture minister. In 1975, he "held up" a bank in Nice with a fake gun to protest Nice's decision to become Cape Town's twin city while South Africa was still under apartheid rule. The same year, he paraded outside Nice's courts, covered in large yellow stars, in what he called a homage to deported Jews.

'Perhaps his most striking act unfolded in 2002 at a festival of performance art in the Colombian city of Cali. There, he protested the kidnapping of a Colombian politician, Ingrid Betancourt, by the country's leftist guerrillas by chopping off half of the smallest finger of his left hand. He then used his blood to write "FARC," the acronym of the guerrilla group (the Revolutionary Armed Forces of Colombia), on a white wall. "The idea was to share in Colombia's violence," he told reporters at the time. But it apparently did not impress the guerrillas: Ms. Betancourt is still being held.'

Many years ago, I saw the urinal at first hand at a Surrealist exhibition at the Pompidou. At the time I was told that Brian Eno had also pissed in the urinal. Boing Boing confirms that in 1995, Eno collected some of his urine and used plastic tubing to splash it onto 'Fountain' even though the work was displayed behind glass at the MoMA. The full story of this incident can be found on Everything2.

In 2000, two Chinese artists, Yuan Cai and Jian Jun Xi Ianjun, who had jumped on Tracy Emin's "My Bed" the year before, also urinated on 'Fountain' (the Tate Modern's version), noting that Duchamp himself said artists defined art.

"Fountain" was rejected for being neither original nor art when Duchamp offered it for the first exhibition of the Society of Independent Artists in New York in 1917. That version of the urinal signed "R. Mutt," was subsequently lost. The Pompidou's "Fountain" is one of eight signed replicas made by Duchamp in 1964.