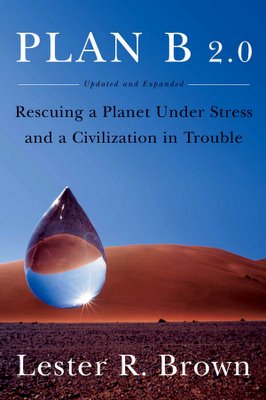 THIS EXTRAORDINARY BOOK SHOULD BE WIDELY READ.
You can buy the book here and find out more about the author.
The whole book is also available on this site as pdf downloads.


“Our global civilization today is on an economic path that is environmentally unsustainable, a path that is leading us toward economic decline and eventual collapse,” says Lester Brown in Plan B 2.0: Rescuing a Planet Under Stress and a Civilization in Trouble.

Although it is obvious that no society can survive the decline of its environmental support systems, many people are not yet convinced of the need for economic restructuring. But this is changing now that China has eclipsed the United States in the consumption of most basic resources, Brown notes in Plan B 2.0, which was produced with major funding from the Lannan Foundation and the U.N. Population Fund.

These numbers are about total consumption. “But what if China reaches the U.S. consumption level per person?” asks Brown. “If China’s economy continues to expand at 8 percent a year, its income per person will reach the current U.S. level in 2031.

“If at that point China’s per capita resource consumption were the same as in the United States today, then its projected 1.45 billion people would consume the equivalent of two thirds of the current world grain harvest. China’s paper consumption would be double the world’s current production. There go the world’s forests.”
If China one day has three cars for every four people, U.S. style, it will have 1.1 billion cars. The whole world today has 800 million cars. To provide the roads, highways, and parking lots to accommodate such a vast fleet, China would have to pave an area equal to the land it now plants in rice. It would need 99 million barrels of oil a day. Yet the world currently produces 84 million barrels per day and may never produce much more.
The western economic model—the fossil-fuel-based, auto-centered, throwaway economy—is not going to work for China. If it does not work for China, it will not work for India, which by 2031 is projected to have a population even larger than China’s. Nor will it work for the 3 billion other people in developing countries who are also dreaming the “American dream.”

And, Brown notes, in an increasingly integrated world economy, where all countries are competing for the same oil, grain, and steel, the existing economic model will not work for industrial countries either. China is helping us see that the days of the old economy are numbered.

Sustaining our early twenty-first century global civilization now depends on shifting to a renewable energy-based, reuse/recycle economy with a diversified transport system. Business as usual—Plan A—cannot take us where we want to go. It is time for Plan B, time to build a new economy and a new world.

Plan B has three components—(1) a restructuring of the global economy so that it can sustain civilization; (2) an all-out effort to eradicate poverty, stabilize population, and restore hope in order to elicit participation of the developing countries; and (3) a systematic effort to restore natural systems.

Glimpses of the new economy can be seen in the wind farms of Western Europe, the solar rooftops of Japan, the fast-growing hybrid car fleet of the United States, the reforested mountains of South Korea, and the bicycle-friendly streets of Amsterdam. “Virtually everything we need to do to build an economy that will sustain economic progress is already being done in one or more countries,” says Brown.

“Among the new sources of energy—wind, solar cells, solar thermal, geothermal, small-scale hydro, biomass—wind is emerging as a major energy source. In Europe, which is leading the world into the wind era, some 40 million people now get their residential electricity from wind farms. The European Wind Energy Association projects that by 2020, half of the region’s population—195 million Europeans—will be getting their residential electricity from wind.

“Wind energy is growing fast for six reasons: It is abundant, cheap, inexhaustible, widely distributed, clean, and climate-benign. No other energy source has this combination of attributes.”

For the U.S. automotive fuel economy, the key to greatly reducing oil use and carbon emissions is gas-electric hybrid cars. The average new car sold in the United States last year got 22 miles to the gallon, compared with 55 miles per gallon for the Toyota Prius. If the United States decided for oil security and climate stabilization reasons to replace its entire fleet of passenger vehicles with super-efficient gas-electric hybrids over the next 10 years, gasoline use could easily be cut in half. This would involve no change in the number of cars or miles driven, only a shift to the most efficient automotive propulsion technology now available.

Beyond this, a gas-electric hybrid with an additional storage battery and a plug-in capacity would allow us to use electricity for short distance driving, such as the daily commute or grocery shopping. This could cut U.S. gasoline use by an additional 20 percent, for a total reduction of 70 percent. Then if we invest in thousands of wind farms across the country to feed cheap electricity into the grid, we could do most short-distance driving with wind energy, dramatically reducing both carbon emissions and the pressure on world oil supplies.
Using timers to recharge batteries with electricity coming from wind farms during the low demand hours between 1 and 6 a.m. costs the equivalent of 50¢-a-gallon gasoline. We have not only an inexhaustible alternative to dwindling reserves of oil, but an incredibly cheap one.

The principal line items in the budget to eradicate poverty are investments in universal primary school education; school lunch programs for the poorest of the poor; basic village-level health care, including vaccinations for childhood diseases; and reproductive health and family planning services for all the world’s women. In total, reaching these goals will take $68 billion of additional expenditures each year.

A strategy for eradicating poverty will not succeed if an economy’s environmental support systems are collapsing. Brown says, “This means putting together an earth restoration budget—one to reforest the earth, restore fisheries, eliminate overgrazing, protect biological diversity, and raise water productivity to the point where we can stabilize water tables and restore the flow of rivers. Adopted worldwide, these measures require additional expenditures of $93 billion per year.”

Combining social goals and earth restoration components into a Plan B budget means an additional annual expenditure of $161 billion. Such an investment is huge, but it is not a charitable act. It is an investment in the world in which our children will live.

“If we fail to build a new economy before decline sets in, it will not be because of a lack of fiscal resources, but rather because of obsolete priorities,” adds Brown. “The world is now spending $975 billion annually for military purposes. The U.S. 2006 military budget of $492 billion, accounting for half of the world total, goes largely to the development and production of new weapon systems. Unfortunately, these weapons are of little help in curbing terrorism, nor can they reverse the deforestation of the earth or stabilize climate.

“The military threats to national security today pale beside the trends of environmental destruction and disruption that threaten the economy and thus our early twenty-first century civilization itself. New threats call for new strategies. These threats are environmental degradation, climate change, the persistence of poverty, and the loss of hope.”

The U.S. military budget is totally out of sync with these new threats. If the United States were to underwrite the entire $161 billion Plan B budget by shifting resources from the $492 billion spent on the military, it still would be spending more for military purposes than all other NATO members plus Russia and China combined.
Of all the resources needed to build an economy that will sustain economic progress, none is more scarce than time. With climate change we may be approaching the point of no return. The temptation is to reset the clock. But we cannot. Nature is the timekeeper.

It is decision time. Like earlier civilizations that got into environmental trouble, we can decide to stay with business as usual and watch our global economy decline and eventually collapse. Or we can shift to Plan B, building an economy that will sustain economic progress.

“It is hard to find the words to express the gravity of our situation and the momentous nature of the decision we are about to make,” says Brown. “How can we convey the urgency of moving quickly? Will tomorrow be too late? “One way or another, the decision will be made by our generation. Of that there is little doubt. But it will affect life on earth for all generations to come.”


As chance would have it, while preparing this post, I got this e-mail press release:
SOUTH WEST LEADS DEBATE ON A ‘ONE PLANET ECONOMY’ AT BRISTOL EVENT

The Government wants a prosperous economy delivered within ‘environmental limits’. But how can we achieve this here in the South West? And who will lead us towards this ‘one planet economy’?

To address these issues, the region’s decision makers and stakeholders in its future will be in attendance at the exclusive Leadership for a One Planet Economy event. taking place at Bristol this Monday 16th of January. A number of high profile speakers have also been invited to kick-start the debate including: Andrew Simms of the New Economics Foundation; Peter Jones, Director of Biffa Waste Management; Simon Roberts, Chief Executive at the Centre for Sustainable Energy; Matthew Spencer, Chief Executive of Regen SW – the South West’s renewable energy agency and Michael Smith, Managing Director of the Venus Company - an ambitiously ‘green’ café outlet.

The event, sponsored by the Environment Agency and supported by the South West of England Regional Development Agency, has been organised by Sustainability South West (SSW), the region’s independent champion of sustainable development. It is the first of a potential series of big regional debates on the South West’s future to be hosted by SSW.

Leslie Watson, Director of Sustainability South West, said: “According to a recent study, our region is running on an ‘overdraft’ of natural resources – as though we had three planets instead of one! This event will begin to provide answers to the question: how can leadership help the South West to gain the benefits of moving towards a more secure, efficient, ‘one planet’, low carbon economy?”