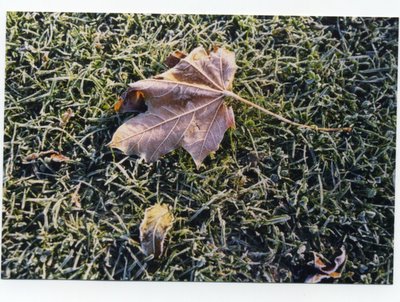 This a slightly edited version of one of those late-night laptop rants, written on 30th October 2000, rediscovered today as part of an archaeological expedition through my computer files. The piece has been deliberately bowdlerised in a couple of places to protect sensitive readers.

'And so tonight, no special night, in fact a Monday night, I was reading the latest issue of the New Yorker I had managed to get my hand on, in fact, and in particular, reading about post-Milosovec Yugoslavia, when I started thinking about the fact that they say writers can only write about what they know about, and this started me thinking.

In fact, what I am trying to get to is reality, and by that I mean ordinary, everyday, grind-in-your-face reality, which is so rich that you could spend your life trying to capture its richness. So much detail, in one day, that a whole novel could not contain it. And yet that is what increasingly seems to be the only thing there is left to write about.

In this sense. There are figures in history, and scenarios in the space-time continuum, notions, capers and inventions of the mind that writers have employed and sustained since time immemorial to entertain their readership. Stories have been passed down, handed down from hoary legend, many of them, perhaps most of them, replays of some ancient set of stories that men and women would tell each other in windy huts as the night drew in and the stars shone in bright empty skies, free of neon reflection.

But in fact, life as we know it can only be experienced in the real-time here-and-now, and it’s the attention to the details of this life, mundane and mysterious, that now seems to fill my consciousness with its desperate need to be recorded in some meaningful way. Time trying to impress its importance before it gets away.

Just so. It seems right now, as I write these words, that the winds of change are blowing, that words are flowing, and that the mystery of literature is upon me. I am listening to the Jazz Passengers, with Debbie Harry, and outside the window a storm is blowing up real good, lashing raindrops against the window as if it meant it.

So, later, there I am back in the bar, and I’m looking around at all the characters here assembled, as most nights, in a flushed and cozy camaraderie of alcoholic consumption, which helps fill the empty part of our lives with some kind of human contact and, flushed with good feeling, we then feel able to continue with our workaday world, that sustain our alcoholic nightly habit.

Only if I was in prison for life would I have time to write at length about just today. Increasingly it’s the minutae, the microscopic detail of life that captures my attention.

And of course, the stories. And the language. Everywhere is the same in that respect. Even if they say nothing, people possess body language. It’s like that feeling when you arrive at Victoria Station and emerge into this flowing river of humanity, All those walking stories, coming towards you, brief glimpses of entire histories, compacted into a single glance. Is that resonant energy or the true insight?

Before you’ve reached the escalator, you’re cup is full. And yet there is the rest of the full-on city to understand, swallow and digest, like some god-given blast of oxygen at high altitude.

So have we got back yet to the leaves in the gutter, and their colours, their particular angular arrangement around the drain cover. And the odd word, overheard in the darkness, enough to set one off on several trains of thought, which also float, close to the darkening sky. Earlier the trees looked whipped by the wind, like damp bronchial fans, and for a moment the skies were clear, with stars and clouds of smoke.

All these spooling moments, that largely go unrecorded, are the stuff of life. And don’t you forget it. If this was my last evening, I would want to say, simply, how rich it’s been. How very rich.

Last night, there was a ladybird in the bar. In November. Maybe it’s all fcuked up. Or maybe, it’s the breath of a prayer. Is prayer an antidote to technology. I just can’t make up my mind.

So today, the whole country was paralysed, in the grip of a storm. Is this a manifestation of our collective state of mind? Are we in such turmoil?

I do not know, but I care. Goddamn. I fcuking care. And that’s the hard part and also the good part.
at 1:14 pm