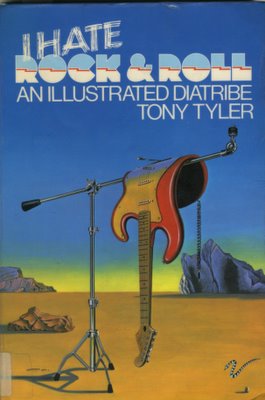 This virtually unobtainable cult classic, published by Vermillion and Company in 1984 - unique as far as I am aware in the rock literature canon - is the inspired and impassioned work of the former Assistant Editor of the NME during the 1970s Tony Tyler - a multi-instrumentalist who played cards with John Lennon in Hamburg, was backstage the night Dylan played the Albert Hall, is an established Tolkein author - who brought to the NME an erudition, a no-nonsense attitude, great humour and a passion that made a big contribution to making the paper what it was. Its impossible to have an uninteresting conversation with Tony - who was kind enough to lend me his personal copy of this neglected classic and to allow me to present to you some extracts from same. To begin: a section of Chapter Five - 'I'll Conduct The Strings, He Can Play Moog, You're On The Spoons: the path of musical pretension,'. The subject is flares.

'Actually, I have a theory about why so many late sixties/early sev­enties Guitar-Hero 'heavy' combos ended up loathing each other; and it all has to do with flared trousers.
Care to hear it?

Strictly speaking, the subject of 'flares' (or 'loon pants1) comes under the heading of ridiculous clothing and thus properly belongs in chapter 2. Yet for me these garments are a major index of the entire loathly vision I am trying to convey. They are a part of my subjective my­thology, a card in my personal Major Arcana, a Jungian archetype dream-symbol, one of the stations of the Tyler Qabala. ('Do not touch the water!' said the Lady Galadriel softly, and Frodo drew back in awe. I know what it was you saw, for that is in my mind also,' she said, nodding. 'Loon pants! The Enemy has many weapons . . .') In fact, I firmly believe that the cut of late sixties/early seventies pop combos' onstage pantaloons contains a mystical key to the innate fatuousness and dumbo malevolence that, for me, has always underwritten the sharp end of rock and roll.

Consider, if you will, the flared-trouser style. Not the gentle, barely perceptible increase in the calibre of the trouser leg as it approaches the instep (a kind of proportional cheating of the sort used to such tasteful effect by Greek architects of Pericles' time), but - in the case of the Cream's trousers - a sudden, gross, exponential leap in leg width. Tight ('Oooh!') at the crotch and snug at the knees, at ankle level these breeks easily measured a yard from stem to stern. Feet were wholly invisible. At moments of 'excitement' Clapton and his rivals and copyists would brace legs wide apart (cf. the precise angle adopted by drunks urinating against a garage wall), don facial expres­sions evocative of Christ's on the Cross, cock their guitars at approxi­mately 45 degrees of angle and get it on (you know?). What let Clapton and the others down was not so much the getting on, nor even the ridiculously contorted facial expressions - but what befell the flared trousers while the hero held his pose.

It's a subtly visual point and I must explain it as clearly as I can, since so much depends on it.

Each violently flared trouser leg, seen from the front, takes the form of a truncated isosceles triangle.

Now, move the bases of the triangles as far apart as you can while simultaneously retaining the truncated apexes in the same general area.

Although the inner seams remain more or less perpendicular, the outer seams balloon yet further outwards, like a multi-petticoated fifties party frock, almost attaining the true horizontal. The eye naturally follows the extreme line - and this, plus the total invisibility of the feet, causes a subjective optical impression that the posing idol's legs are actually braced at an impossible, contortionist, sinew-cracking an­gle. And one waits for the ping of the buttons, the ripping of cloth and the thud-thud-trickle-trickle as the blues-wailing gonads explode and roll away across the stage towards the peace-sign-making audience, the ultimate rock and roll souvenirs.

Now it is my theory that when members of supergroups of the era wore highly exaggerated flared trousers - as most of them did - they were subjected to wave upon wave of subconscious anxiety thereby. Not all of them were thick, and many of them must have known that they were making possibly the greatest single sartorial mistake since the wholesale adoption of the kilt by peoples of proto-Celtic origin. However, onstage (where one does not, as a rule, spend too much time meditating on the cut of one's trousers) they were of course temporarily able to forget the tragicomic proportions of the garments with which they had chosen to adorn their lower limbs.

Then would inevitably come the cardinal instant, the deadly moment of anti-satori. One man would swing eyes left (or right) across the stage in a routine, showbizzy grimace of ain't-we-really-gettin'-it-on good fellowship . . . and lo! There would be his supercolleague, smirk­ing ritually back, possibly bawling 'Yeah!' - but above all decked out in the most evilly ridiculous, bitterly humiliating pair of trousers on the face of the entire planet!

Reaction One: My God, I'm in a band with this nerd!
Reaction Two: My God, I look like that too!

Meanwhile the drummer - who in any case will be the ugliest mem­ber of the band - has his shirt off, generously allowing the roadies in charge of the supertrooper spotlights to illuminate every single pustule, blackhead, 'track mark' and skin blemish in the boldest possible relief.

It's my guess that, at this point, massive, traumatic resentment then came flooding in - many bum notes and prolonged hesitations in the guitar solos of the day are, I feel sure, due to sudden off-the-wall revelations of this type striking home in mid-flow.

In circumstances like these, it's not surprising that virtually all com­bos of this kind either broke up acrimoniously, or came to be notorious for their in-band hostilities and general psychotic behaviour.

The Cream fought each other like bull terriers and broke up, snarl­ing. The Who similarly hit each other at regular intervals - but early on struck on the idea of taking out their loathing on their instruments (and their hotel rooms), and so stayed together. Led Zeppelin's drum­mer, John Bonham, and their manager-figure, former UK all-in wres­tler Peter Grant, were men of violence in every sense of the word -but also directed it outwards. Jimi Hendrix notoriously despised his back-up musicians - then died of vomit asphyxiation after drugging himself unconscious. This deed may have been due to the poor quality of London nightlife, as I flippantly suggested in an earlier chapter, or it mav have been an accident . . . or it may have been a longstanding morale problem due to his trousers! If so. then this must surely be the extremest reaction on record.

With the arrival of the Great Loon Pants*Psychosis, the Guitar Cowboy begins to clip-clop towards his inevitable sunset. Although legions of clone bands had by now appeared (a few are with us to this day), the gargantuism of the whole thing - enormous walls of ampli­fication, way in excess of need; frighteningly prolific metal Triffids replacing the humble Premier drumkit; interminable guitar solos: in­creasing 'surrealism' (i.e. meaninglessness) of lyrics; ever-escalating ticket prices; ever-louder PA systems; and above all the grotesque, inhuman proportions of the artistes’ trousers - all this rampant, Speer-like gigantism suddenly looked . . . rather ridiculous. Embar­rassing, even. Where hitherto one had joyously patronized concerts by these people, and worn the attendance badges with pride, suddenly -imperceptibly - one grew evasive, even casually dismissive. While paying lip-service to the Guitar Heroes' pioneering role, one - some­how - found oneself no longer actually listening - not very much, anyway - to their records.

Scientists now say that it may have been a giant comet that killed off the dinosaurs. This may or may not be true, but to my mind it was undoubtedly loon pants that sealed the evolutionary doom of the Guitar Hero of rock and roll's very own Jurassic period.

Never underestimate the power of fashion in this racket.'

*The term loon pants' - so apt. so descriptive - appears to have originated with UK mail-order denim companies. Originates from pantaloons, as any fule kno.
at 11:47 pm

Genuinely marvellous. I love a wild surmise, especially if it is one underpinned by pythagorean rigour and quality amplification.