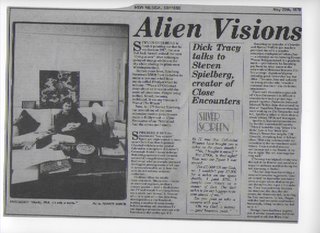 SINCE THE FILM opened. Dr. Hynek has been receiving 7,000 letters a week at his UFO centre. According to Spielberg "The letters were from people who now fell it safe to talk about their encounters and that's what I felt was very positive and healthy.
"It's been a cultist closet phenomena and it's suddenly going public. Everything's going public these days anyway. The closet queens are coming out and marching down the streets with placards. Presidents are admitting lust for other women during a marriage, so there's nothing unusual in the case of people saying: 'UFOs have been on my mind for 20 years but I was afraid you'd put me in a loony bin, so I kept my mouth shut'."
Footnotes:
1. Was Dr Hynek a super-secret mole for the CIA. Read the arguments for and against.
at 2:46 pm