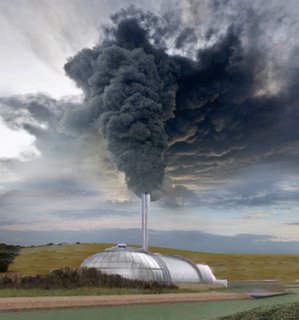 'Smoke from A Chimney'- Nigel Cole

This week attended a public meeting organised by DOVE (Defenders of the Ouse Valley and Estuary) in Lewes Town Hall to discover the current state of their campaign to try and prevent the building of a waste incinerator in the port of Newhaven on the South Coast. DOVE are running a very professional campaign and have an excellent website here. DOVE outline the current state of affairs as follows:

East Sussex County Council and Brighton and Hove City Council have adopted a combined plan to deal with the waste from East Sussex. The plan proposes building a waste incinerator in Newhaven.

Incineration doesn't make sense on any level. Incineration does not solve the waste problem nor make the waste disappear. It merely releases dangerous toxins into the atmosphere and concentrates all the remaining hazardous materials into toxic ash which has to be disposed of. This is usually landfilled, mixed in with construction materials which then become toxic themselves or by other means but it cannot be safely disposed of. There are proven safer and ultimately cheaper alternatives to waste management that have been implemented successfully elsewhere. A zero waste strategy based upon these ideas has been sent to the councils.

When the first draft of the Waste Local Plan was put on public deposit, record numbers of people objected and forced a public enquiry. DOVE made representations throughout the enquiry and the Inspector produced his report.

The modified plan was put on public deposit until 24th March 2005 and thousands wrote in to register their objections. East Sussex County Council have now (September 2005) processed each letter and form and registered each individual point of objection. They claim that they will take these objections into consideration when they decide whether to modify the Waste Local Plan, to adopt the Waste Local Plan or to call for another public enquiry. DOVE will, of course, oppose both the adoption of the Waste Local Plan and the Planning Application for an incinerator.

DOVE are currently seeking to get thousands of residents in our local area to write objection letters/e-mails to ESCC by January 27th. Details on their site here

I took notes on the evening in my ever-handy Silvine Memo Book and here are some of the things I learnt:

The plant is designed to handle waste from the a large part of East Sussex, ranging from Brighton to Hastings. It is designed to last for 25 years. Its twin chimneys (65m [200ft] high) will emit 4 million cu.m. of gas a day, which includes nitrous oxide, sulphur dioxide and traces of dioxin, a toxic substance for which there is no safe limit.The plant will produce as much CO2 as a gas-fired power station.

The plant will operate 24/7. It is not a heat recovery plant and is highly inefficient. The plant site is near a children's school, residential areas and will affect an Area of Natural Beauty (AONB) and an SSSI (Site of Special Scientific Interest). To get the waste to the plant will require 210 giant lorries a day. The Councils get fined if the levels of waste fail to meet the plant's pre-set targets.

'It is vital everybody makes some noise' concluded the last speaker, film director Nigel Cole.

Waste incineration is, of course, a national issue and Friends of the Earth (FOE) are one of the lead organisations opposing this approach to waste management. They have an excellent set of reports, briefings and action packs located here. This includes a 2004 FOE research paper on municipal waste incinerators which shows that environmental problems are adding to the deprivation that the poorest communities face. It shows that 50 per cent of operating municipal waste incinerators in England are located in the most deprived 10 per cent of Council wards.

According to a UK Parliament Post Note NO 149 (dated December 200o) on the incineration of houshold waste: Each year UK households generate around 30 million tonnes of municipal solid waste (MSW). The Department of the Environment, Transport and the Regions (DETR) reports that this figure appears to be growing at about 3% per year.

Management of MSW in the UK is dominated (83%) by landfill disposal with less than one-tenth either incinerated or recycled.b There are 13 MSW incinerators (MSWIs) operating in Britain (there are none in Northern Ireland), burning around 2 million tonnes of MSW each year (8% of the total). All MSWIs recover some of the energy from combustion as electricity or in district heating. As such, these facilities are known as 'energy from waste’ (EfW) or ‘waste to energy’ plants. Current facilities range in size from a plant in Lerwick, handling 26,000 tonnes per year (26kt/yr) and producing heat for a local district heating system to an 600kt/yr facility at Edmonton, generating 30 megawatts (MW) of electricity. Over half of all current incinerators handle more than 200kt/yr, and 40% between 100 and 200kt/yr.

The UK government is currently implementing a waste strategy that could well see the building of over 100 incinerators over the next 15 years.

On 14th June 2003, UK. More than 235 groups from 62 countries today took action against waste incineration to serve notice to their governments that time is running out on the controversial technology despite vigorous attempts by the incineration industry to repackage their burners as renewable energy or modern thermal systems for waste disposal.

Public opposition has killed many proposed and existing incinerators worldwide. For instance, at least 33 proposed burners have been refused planning permission in the UK due to public opposition and a massive grassroots movement has defeated more than 300 municipal waste incinerator proposals in the United States in the last 15 years. In Japan, the most incinerator intensive country, public pressure has resulted in over 500 incinerators being shut down in recent years. Jurisdictions in 15 countries have passed partial bans on incineration and one country, the Philippines, has banned all incineration.