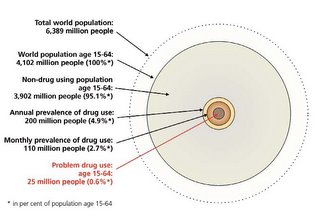 According to the UN Office on Drugs and Crime (UNODC)
2006 World Drug Report:

The total number of drug users in the world is now estimated at some 200 million people, equivalent to about 5 per cent of the global population age 15-64.

UNODC relies on the perception of the trends in individual countries by national experts. A global analysis of these perceptions suggests that the strongest increase over the last decade was for cannabis use and ATS, and at lower levels for opiates and cocaine.

About 28 per cent of the world’s adult population is estimated to use tobacco,which exceeds by far, the number of people using illicit drugs (4 per cent for cannabis and 1 per cent for ATS, cocaine and opiates combined).

Cannabis remains by far the most commonly used drug in the world. Cannabis herb and resin remain the most widely trafficked drugs worldwide, accounting for the majority of all seizures.

An estimated 162 million people used cannabis in 2004, equivalent to some 4 per cent of the global population age 15-64.

In relative terms, cannabis use is most prevalent in , followed by North and .While has the lowest prevalence expressed as part of the population, in absolute terms it is the region that is home to some 52 million cannabis users, more than a third of the estimated total.

Since the late 1990s, cannabis use increased by more than 10 per cent at the global level. Though an estimated 162 million people use cannabis annually and it is produced in some 176 countries around the world, many basic facts about the supply and demand for this drug remain obscure.

The world’s biggest drug market is growing and uncharted

It is exceedingly difficult to document where some 4 per cent of the world’s adult population are securing their supplies. Cannabis can be grown in virtually any country, and is increasingly grown indoors in the developed nations. Unlike other illicit drugs, users can, and do, cultivate their own supply, and so production is diffuse.

The circumstances around cannabis consumption are no better understood. In most markets, cannabis is cheap. Consequently, the precise amounts bought and consumed remain vague to all parties concerned.

[Edited highlights from the Executive Summary]