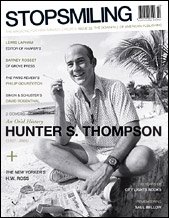 LONG LIVE THE HIGH PRIEST OF GONZO: AN ORAL HISTORY OF DR. HUNTER S. THOMPSON (1937-2005)
One year after his death, to celebrate his life and legacy, STOPSMILING compiled a 42-page tribute to the Good Doctor in our 22nd issue titled “Long Live the High Priest of Gonzo: An Oral History of Hunter S. Thompson”. This oral history from a dozen acquaintances and loved ones represents Thompson in every stage of his professional career, and hints at the work still needed to be done to preserve the legacy of one of the great writers of the 20th century. Included in the issue: Ralph Steadman (artist and co-founder of gonzo journalism), Douglas Brinkley (writer and historian), Anita Thompson (spouse of HST), P.J. O’Rourke (author and journalist), Bob Braudis (Sheriff of Pitkin County), David Rosenthal (editor and publisher, Simon & Schuster), David Felton (former editor, Rolling Stone), Craig Vetter (writer, Playboy), John A. Walsh (executive editor of ESPN), Wayne Ewing (director of Breakfast with Hunter), Tom Benton (artist and printmaker), Joe Petro III (artist and printmaker) Also included: A pull-out poster of Ralph Steadman artwork, and reproductions of HST's personal faxes to Ed Bradley, James Carville and Keith Richards.

'Hunter telephoned me on Feb. 19, the night before his death. He sounded scared.
It wasn't always easy to understand what he said, particularly over the phone,
he mumbled, yet when there was something he really wanted you to understand, you did. He'd been working on a story about the World Trade Center attacks
and had stumbled across what he felt was hard evidence showing the towers had been brought down not by the airplanes that flew into them but by explosive charges set off in their foundations. Now he thought someone was out to stop him publishing it: "They're gonna make it look like suicide," he said. "I know how these bastards think."
This is the opening paragraph of an essay by Paul William Roberts entitled 'Alexander Pope in a prose convertible' published by the Toronto Globe and Mail You can access the whole article by registering with the newspaper and paying a small fee.

It was just as well that I did because otherwise I might also have been lending support to another 9/11 conspiracy story on the net; this one is posted up on Total 9/11 Info

If you do read the whole article, you will discover that the writer continues:
'That's how I imagine a tribute to Hunter S. Thompson should begin. He was indeed working on such a story, but it wasn't what killed him. he exercised his own option to do that.'

It would be interesting to know how much of the story he completed and what he did have to say on the subject.