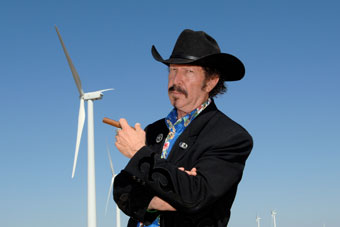 The renegade maverick Kinky Friedman is running for Governor of Texas. Here are a couple of reasons why he suggests Texans should vote for him. 30 days to go the election at time of writing. Read all about it here
Thanks to ML

Why the hell not? Texas politics stinks.

The parties sell themselves to big donors, lobbyists control the legislature's agenda, and the top fundraising groups in the state are being indicted for money laundering. Corruption and big money have such a chokehold that the two major parties blew $100 million in the last governor's race to elect a candidate to a job that pays $100,000 a year. And for all that money spent, less than 30% of us bothered to show up at the polls.

Why? Because it's hard to stand in line at the ballot box when neither candidate promises anything more than politics as usual. Texans are the most independent people in America, and if we're going to be inspired, the inspiration will come from someone unafraid to deal in new ideas and honest answers, an independent leader who lets the people call the plays instead of dancing to the tune of the money men.

That kind of leader is never going to look or sound like a politician. He won't steer by image polls, speak in hollow phrases approved by focus groups, or show up in hand-tailored suits.

You'll know him when you see him—true Texas leaders are unmistakable. After all, the last independent governor of Texas was Sam Houston. The next will be Kinky Friedman.

It's time for Texas to reclaim bragging rights as an energy icon. As governor, Kinky will accomplish that by encouraging investment and innovation in new methods of electricity generation and new fuels like biodiesel.

Think these are fringe technologies? Think again. Wind power plants, solar power arrays, and landfill gas capture systems are already in operation across Texas in cities from Fort Stockton to Fort Worth. Texas has been called "the Saudi Arabia of renewable energy," and firms from TXU to Kyocera are already clamoring for a piece of the action.

Watch this video clip. It is hilarious, it is true, and it is politically incorrect as hell.

Next, read up on Kinky's get-tough illegal alien plan and his 5 Mexican generals plan. Kinky's common sense border security plan is the straight up "minuteman" approach, not Perry's namby-pamby "let's set up cameras" approach. Make no mistake, Kinky is the only candidate brave enough to say we need armed military generals on our southern border.

Now consider Kinky's party affiliation. Kinky has run for office in the past as a Republican and he voted for Bush/Cheney in 2004.

Here is an excerpt from Kinky's interview with Ruminator magazine which confirms that he supported Bush's Middle East foreign policy:
Question: So does this idea of the honorable cowboy have anything to do with why you threw your support behind President Bush in this last election? You did, didn’t you?
Kinky: Yes. I did in this last election, but I didn’t vote for him the first time.
Question: Who did you vote for in 2000?
Kinky: I voted for Gore then. I was conflicted. . .but I was not for Bush that time. Since then, though, we’ve become friends. And that’s what’s changed things.
Question: So it’s your friendship with him that’s changed your mind about having him as president more than his specific political positions?
Kinky: Well, actually, I agree with most of his political positions overseas, his foreign policy. On domestic issues, I’m more in line with the Democrats. I basically think he played a poor hand well after September 11. What he’s been doing in the Near East and in the Middle East, he’s handling that well, I think.

Now maybe you are like me and you were worried that Kinky showed liberal tendencies by voting for a tree-hugger like Al Gore. Well, rest assuredthat Kinky was mistaken when he said that. Kinky's public voting records confirm he didn't vote for Al Gore in 2000 because Kinky didn't waste his vote on any candidate from 1994 to 2004 when he voted for Bush/Cheney.

Maybe you think Kinky's a liberal because he's a Jew. Rest assured, Kinky's views on religion are well to the right of Perry's. Kinky wants to take time during the school day for prayers in schools, and he wants to post the Ten Commandments in public school classrooms.