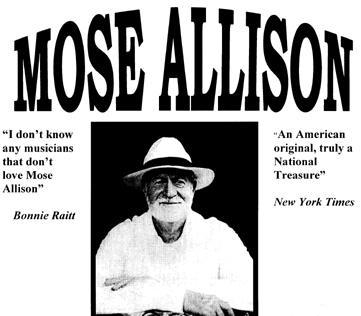 Check our more Mose at The Mose Allison Website

So I’m in the noisy chaos of The Ship in London's Wardour Street – a legendary bar – with Alex and Sam, when I suddenly remember that I’d seen a thing in the paper that Mose Allison was appearing at Pizza Express just round the corner, so I rushed round there only to discover that it was all sold out. Not a surprise. Later, back at the bar, we got hungry and I suggested why don’t we have a pizza anyway. So there we are at Pizza Express, after several pints and a Peroni, just finished our meal, when I turned my head and there was Mose Allison. I just knew it was him. He’s a small-framed white-haired,white-bearded guy wearing a bomber jacket and chewing gum. He didn’t look like his pictures but he just had that attitude thing, standing in the corner of the restaurant, not looking at anyone, chewing gum. Always difficult situations to judge correctly but what the hell, I just stood up, went over to him and said: Are you Mister Mose Allison. He glanced up at me briefly and grunted. I said: I have always really liked your stuff man. I couldn’t get a ticket for tonight but I just wanted to come over and say hello. He said: Maybe someone won’t turn up. I said: Anyway, great to meet you and shook his hand. He had nice hands, cool to the touch and a firm but delicate shake. For a pianist to shake your hand like that, I thought, was a trusting gesture, being as they are the tools of the trade. That was it. I returned to my seat. That night I dreamed about all the other people who had shaken hands with Mose Allison.Later I discovered he’ll be 79 years old this up-coming November 11th.

I was a latecomer to Mose’s music and I’m still exploring. I can recommend ‘Mose Allison Sings and Plays’ on Atco. The most exciting thing I’ve got in the Vinyl Vaults so far is a Prestige Two-Album set which I bought from Rick’s, simply called ‘Mose Allison.' Interestingly this contains some sleevenotes written by Pete Townshend. In them he describes how he first encountered Mose’s music in November 1963 and swore he was black: ‘The man’s voice was heaven. So cool, so decisively hip, uncomplicated and spaced away from the mainstream of gravel voiced Delta bluesmen.’

He writes: ‘From that day as I walked down city streets I imagined myself to be Mose. Singing, “Everybody’s talkin’ bout the…seventh son, in this whole wide world there is only one…an’ I’m the one.” The thing was I wasn’t the one. I was a fairly lame individual with a big nose, a beatle fringe and still had time to learn a few Jimmy Reed tunes, but Moses was MY MAN. I felt him to be the epitome of restrained screaming POWER. He might not understand that himself, but his voice was so right that I felt it was the voice of a gentle giant. The man, the musician, with the strength to change the world, but the humility and the character to stand alone, live his own life and wait his natural time.’

[Unfortunately missed the BBC2 documentary ‘Mose Allison: Ever Since I Stole the Blues’. Hope you had better luck.]]

‘Live At The Wetlands’ - Robert Randolph & The Family Band (Led by on his 13-string steel guitar, backed by a band who know how to funk and strut and groove. The Wetlands club in was closing down and this is one of the last nights. Full on. [Dare Records/Warner Bros]

Granny Takes A Trip/Conversations Dead Man – a cool retro compilation celebrating a time and a place – the boutique ‘Granny Takes A Trip’ at World’s End in the early 60’s. Forever associated with the graphic work of Nigel Weymouth and Michael English, aka Hapshash and the Coloured Coat. [Sony]

‘Till The Sun Turns Black’ – Ray Lamontaigne. If you loved ‘Trouble’ you’ll dig this. Produced by the legendary Ethan Johns, it cushions Ray’s breathy voice with a range of warm analog-sounding environments – and some great horns.[ RCA]

Modern Times – Bob Dylan. Reluctant as I was to listen to this record, it captured me on the third or fourth time through. This is Dylan’s best band since The Band. Some beautiful playing and the songs just get stronger as the album draws you in. He is still the []

Careless Love – Madeleine Peyroux. Most of you will have already copped this. I was just round someone’s house late at night and this young Billie Holiday type of voice came out of the speakers. I was hooked. [Rounder] Her new album ‘Half The Perfect World’ is out this month.