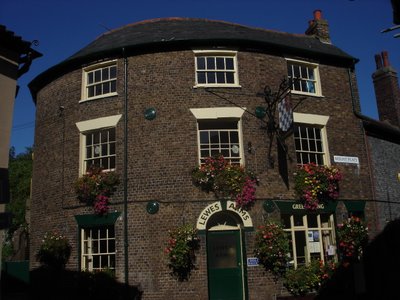 New readers to this 'thread' are recommended to read this previous posting first:
State of the Nation: Think About Your Local
This triggered off the two stories below:

Beer Wars: In August, Harveys Best won the real ale organisation CAMRA’s Best Bitter Award, and came second in the Best Beer award. This, in the eyes of the people who know these things, makes it the best bitter of its type and the second best beer of any type in the country. It is the sort of beer that landlords should by dying to sell. Yet Greene King, who own the licence for the Lewes Arms, are reportedly planning to stop serving it in that pub, having already banned it from the Black Horse and the Royal Oak. And banned is the appropriate word: pubs are allowed guest ales, as long as they are NOT Harveys.

There is a petition going round, trying to persuade Greene King to change their mind. Locals are already planning where they are going to drink instead of the Arms. I was in there on Friday night, and it was one of the main topics of conversation among the clientele, who go there largely to chat. The pub, of course, has long had a no-music, no-mobile phones and no-fruit machine policy to aid the art of conversation. The Harveys Best, of course, plays its part in the tongue-loosening: estimates vary but it is reported to outsell the GK beers in the pub
by at least 3-1.

Greene King, of course, are no strangers to bullying marketing tactics. Originally a small local brewery in Bury St Edmonds in Suffolk (established in 1799), in recent years the company has started growing into a corporate monster, gobbling up its competitors, first in East Anglia, and increasingly all over the country. The company now owns 2000 pubs, and the Hungry Horse Hotel chain. They have recently bought up breweries such as Belhaven, Morland, Ridley’s and Ruddles. The premises of one of these formerly proud institutions remains open (Belhaven); the others have all been sold and their best beers incorporated (often much to their detriment) into the Greene King empire.

“Ruddles County used to be a world class beer,” says Peter Coppard, of CAMRA, “since Greene King destroyed it I wouldn’t cross the road to buy a pint.” “Greene King are rapidly becoming a national concern,” he continues, “which should be of national concern.” Harveys may be losing sales through Greene King’s aggressive marketing tactics, but Coppard stresses that the company is unlikely to be an immediate takeover target. “But a lot of other breweries are a bit shaky,” he says, suggesting a further increase in the Greene Kingdom in the near future. “This is of great concern to CAMRA. All these mergers constitute a reduction in choice for the consumer and a reduction of jobs in the beer industry.”

So is this something we should be getting het up about at a time when our country is involved in two wars and the global economy is starving half the third world to death? Well, yes, actually. Harveys in the Lewes Arms (and the pub has always kept an excellent pint) is one of Lewes’ institutions. And if Greene King stop serving it there, the nature of the pub is likely to change for good. And thus the nature of the town. “You can’t really blame the company for not wanting to serve one of its rival’s beers, to the detriment of its own,” says Coppard. “But the sad thing is that we’ve seen other pubs in Lewes suffer from Harveys being taken away, and it’s a shame for the Lewes Arms, which is likely to see the same thing happen. Harveys drinkers are likely to vote with their feet, and move to other pubs, where they do serve the local bitter. I suggest that Harveys and Greene King do a pub swap, so that the locals can stay in the place which is so suited to their needs.” Sounds like a good idea to us. But which pub? 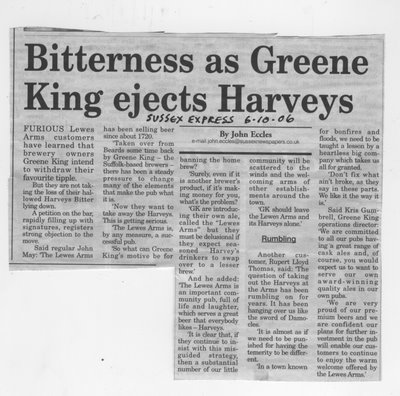