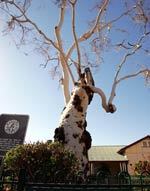 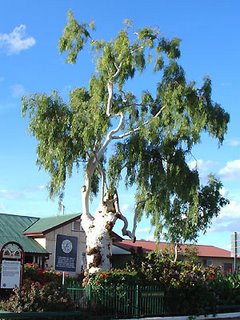 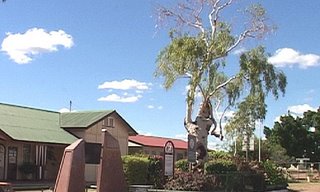 (Left): The Healthy Tree of Knowledge in 2005 before the tree was poisoned (Photo:Julia Harris); (Right bottom): After the poisoning (Photo: ABC); (Right top) The dead tree.
Australian Tree of Knowledge Poisoned: The Tree of Knowledge - a 150 year old, ten metre Ghost Gum located opposite the hotel in the centre of the Central West Queensland town of Barcaldine - symbolises an important time in Australia's political development as it was the meeting place for shearers during their unsuccessful strike of 1891. This strike, in conjunction with the maritime strike of 1890, played a crucial role in the historical connection between unions and what eventually became the Australian Labor Party. The tree was included in the National Heritage List in December 2005. This October 3rd it was pronounced dead, some five months after vandals poured 30 litres of toxic chemicals around the roots. Its trunk will be used as a permanent monument on the site.

Hurricane Katrina’s winds and water, but mostly her salty flood waters, may end up killing 70 per cent of New Orleans urban forest. More than 50,000 trees were lost on public grounds, including some 2,000 magnolias, and a quarter of a million trees lost citywide. The city's oaks may still succumb as many were submerged in water for weeks. They tend to die a slower death than other trees. Jean Fahr, executive director of the New Orleans nonprofit Parkway Partners Program, said “We’ve never seen such a loss in the history of the United States,’’ By comparison, the southern Florida area struck by Hurricane Andrew in 1992 lost 45 percent of its tree canopy. “Magnolias took it the worst because they couldn’t handle the salt water,’’ Fahr said. Full story in: The Advocate

Muslim hardliners chopped up a 100-year-old banyan tree in Jakarta to halt a rumour about its special powers from spreading, officials in the Indonesian city. "Surely, no one can believe that a tree is more powerful than a human," Zainal Arifin, the leader of the Muslim group that admits to attacking the tree, was quoted as saying by Detik.com news website. "We did this to propagate Islam." The sprawling tree's branches were hacked away Sunday, leaving just its trunk, said Sarwo Handayani, head of the city's park agency. She said it was too early to say if the tree will survive. Earlier, rumours had spread that cutting down the tree would bring bad luck because it was spared during a tree-felling drive to make way for a new bus lane in central Jakarta, Handayani said. She said the rumours gained strength after unidentified people left offerings at the tree's base. Handayani dismissed the rumours of supernatural involvement as nonsense, saying officials did not fell the tree because the bus lane could be routed around it. "This was an outrageous act," she said of the damage to the tree, adding that the city had reported it to police on Monday as an act of vandalism. Arifin said the fact that nothing supernatural happened to the Muslims who attacked the tree proves that it has no mystical powers. Source: Indonesian group attacks century-old tree 'to propagate Islam' (October 3, 2006 /The Associated Press)