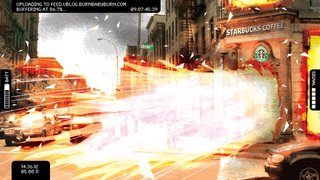 New York, NY - The year is 2011, and Jimmy Burns, a young anti-corporate blogger has just seen his Williamsburg apartment blown to bits by yet another terrorist attack on New York City. He’s recorded the gruesome scene on his videoblog camera-footage Burns beams live to a freaked-out world and that makes him an overnight media sensation. Exploited by his own network (Global News:”Your home for 24-hour terror coverage”), enraged by the terrorists, and determined to tell the American people the truth, Burns takes off for Iraq to get the real story of a war that’s been raging for more than eight years. SHOOTING WAR is written by Anthony Lapp�, illustrated by Dan Goldman, and debuts on May 15, 2006 on SMITH (www.smithmag.net/shootingwar).

Inspired by Lapp�’s own experiences shooting an award-winning documentary and blogging about the Iraq war, SHOOTING WAR is a fictional story about the future of citizen journalism. SHOOTING WAR is a first of its kind: a serialized online graphic novel about the war, presented with Flash animation flourishes, using actual sounds recorded in Iraq-and offered exclusively on SMITH. A new chapter will appear each Monday, for eight weeks, along with a Flash animated trailer created by NY new media shop Indelible (www.indelible.tv) with music by DJ Spooky.

“SHOOTING WAR is a commentary about where we’re headed in Iraq and the larger war on terror as well as the role of bloggers in telling the stories of the future,” says Lapp�. “This is my first foray into graphic fiction, so teaming up with a slamming artist, brimming with street cred like Dan Goldman, and a magazine that’s so forward-thinking gives me the confidence it’s the right time, team, and place for this tale that’s been brewing in my mind since the day I left Iraq.”

SMITH editor Larry Smith is thrilled to present SHOOTING WAR on SMITH (www.smithmag.net), the magazine he launched online this past January to much critical acclaim. “SMITH magazine is the perfect home for SHOOTING WAR,” he says. “SMITH is all about the next wave of personal storytelling, using and celebrating the technology tools that have made new forms of telling stories so exciting. SHOOTING WAR embodies our ethos, but ultimately, what drew me to the project was the power of this narrative. It’s dark, smart, sexy, and violent with much to please both the comics fan and those not yet hip to the medium.”

“Anthony’s created a slipstream near-future where the whole world is now the Third World and our foreign policy karma’s come home to roost,” says Goldman. “We’re talking reverberations and repercussions…if a picture is worth a thousand words, SHOOTING WAR will speak volumes.”

About SHOOTING WAR Team
SHOOTING WAR creator and writer Anthony Lapp� is Executive Editor of www.GNN.tv, the Web site for the Guerrilla News Network. He is the co-author of their book True Lies (Plume) and the producer of their award-winning Showtime documentary about Iraq, BattleGround: 21 Days on the Empire’s Edge. He has written for The New York Times, the Huffington Post, New York, Vice, and Salon, and has been a news producer for MTV and Fuse. He is a frequent guest on Air America and other radio stations across the country.

SHOOTING WAR artist Dan Goldman (www.dangoldman.net) is a writer/artist/designer and the co-author of the first political-fiction graphic novel, Everyman: Be the People. He is a founding member of the online comics studio ACT-I-VATE (act-i-vate.livejournal.com) and co-creator of the upcoming comics series The 718.