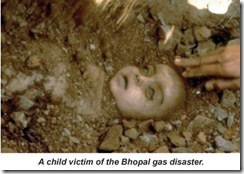 Down the Lewes Arms for a quick ginger beer (literally) earlier this evening and bumped into my friend Pete Finnigan who has just started working with The Bhopal Medical Appeal in Brighton, which raises funds and awareness for the Bhopal Medical Centre.

For those who do not know or remember, Bhopal was the site of one of the world's worst chemical accidents, the consequences of which are still causing tremendous damage to the environment and the local inhabitants.

On the night of Dec. 2nd and 3rd, 1984, a Union Carbide plant in Bhopal, India, began leaking 27 tons of the deadly gas methyl isocyanate. None of the six safety systems designed to contain such a leak were operational, allowing the gas to spread throughout the city of Bhopal.  Half a million people were exposed to the gas and 20,000 have died to date as a result of their exposure. More than 120,000 people still suffer from ailments caused by the accident and the subsequent pollution at the plant site.

It is the 25th anniversary of the disaster this coming December and a big push is on to make people aware of the ongoing crisis there and the suffering of Bhopal's people.