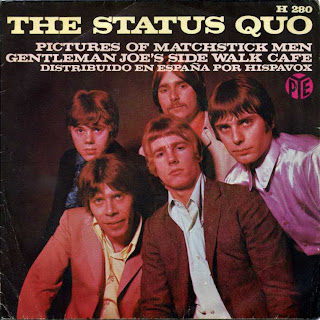 On Saturday night I went to see Status Quo in a field on the edge of Bedgebury Pinetum, nr Tunbridge Wells in southern England. It was freebie. I admit it. I drank and danced like a man who'd been let out of a locked room. The Quo do what they do best. Rock out. The best-known anthems are big crowd pleasers but mostly just sound samey after the first two. They played some really cool tracks, a Canned Heat type number and some of their 60s singles. Whatever. It was fun. Most common crowd acessory: inflatable pink plastic guitars. Spotted: one demin jacket entirely covered with Quo patches. Excellent.

The following morning, still feeling slightly 'spaced', with an 'I'm-at-peace-with-my-world' sort of mood on me, I find myself sitting squeezed between Richard Whatmore, Acting Director of the Sussex Centre for Intellectual History, and Ian somebody, a Conservative blogger, going out live on the BBC Politics Show (South-East version), talking about Tom Paine. It was 7 minutes of questions and chat. When

asked who in modern times resembles Tom Paine I said Hunter S. Thompson, whose name just came to me in a flash. When asked to explain why, I think I was less than articulate. Who knows. The web version of the programme doesn't have the segment we did in there, although there is a brief online article about Tom Paine.
at 7:44 pm