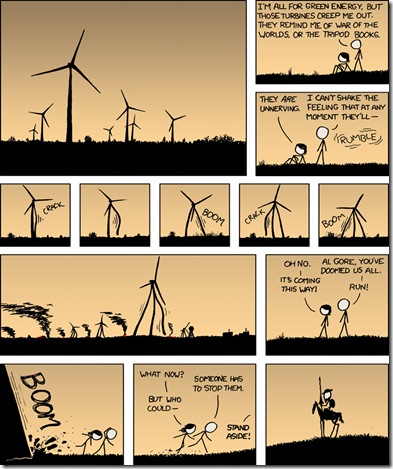 A webcomic of romance,
sarcasm, math, and language.

Since around 1997, when I first met energy efficiency guru Amory Lovins I've  been a cheerleader for this new industrial revolution. I've badgered some of the best editors in the business about it. As the years passed, as things evolved the picture became clearer. The Generalist is full of posts on the subject.  The revolution is on.

The sums of money involved are colossal, trillions over an extended period - amounts equal to their defence budget.

They are going for green cars and will dominate the faltering car market in the west. There already building them.

Their leading the world in solar which will drive the price right down.

The Chinese have a massive population and massive pollution problems. Everything is on a grand scale.

The giant is moving and is going to drive the rest of the world along a similar path.

Now its a race against time.