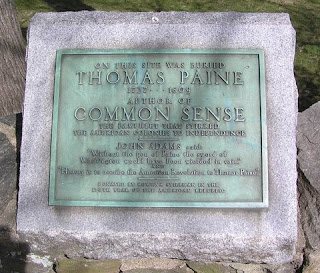 On this day, 200 years ago, on an overcast morning, Tom Paine died in his sleep at 59 Grove Street in Greenwich Village, New York. he was 72.

Two days later, he was buried on his small farm in New Rochell, twenty miles north of the city. Only six mourners came to his funeral, two of whom were black, most likely freedmen. An eyewitnes write: 'This interment was a scene to affect and to wound any sensible heart. Contemplating who it was, what man it was, that we were committing to an obscure grave on an open and disregarded bit of land, I could not help but feel most acutely.”

According to Mike Marquesee, writing in The Hindu: 'Not long before, New Rochelle’s bigwigs had barred Paine from voting, claiming he was not a U.S. citizen. Paine, who had virtually invented the idea of U.S. citizenship, was furious. But this was not the end of his indignities. When he sought a place to be buried, even the Quakers would not oblige him. Hence the muted funeral of the man who had inspired and guided revolutions in north America and France, and equally important, the revolution that did not happen, in Britain.'

'If we look back to the riots and tumults which at various times have happened in England, we shall find, that they did not proceed from the want of a government, but that government was itself the generating cause; instead of consolidating society, it divided it; it deprived it of its natural cohesion, and engendered discontents and disorders, which otherwise would not have existed. In those associations which men promiscuously form for the purpose of trade or of any concern, in which government is totally out of the question, and in which they act merely on the principles of society, we see how naturally the various parties unite; and this shows, by comparison, that governments, so far from always being the cause or means of order, are often the destruction of it.'

Society is a Blessing, But Government is Evil
by Thomas Paine

Read the longer text at the Tenth Amendment Center

Who Was Thomas Paine? by Brendan O'Neill

Citizen of the world: a brief survey of the life and times of Thomas Paine (1737-1809) by Anne Talbot