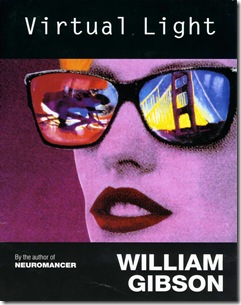 It was 1993, three years after our last encounter, that I learnt Gibson was coming to the UK to promote 'Virtual Light' and I began making plans to shoot a video interview with him.The original concept, outlined in a letter to tv production company Kudos (dated 10th Sept) was as follows:

'I would like to do this interview in two locations: one, a small studio with a bluescreen in Central London, allowing images and graphics to be matted behind him; two, at Level One, the giant new computer games floor at HMV in Oxford Street which, by coincidence is being opened the same week that Gibson is here. We can shoot at the opening party and put Gibson's image on their giant video wall.'

On 21st September, I wrote a personal note to Gibson, confirming that Kudos were backing it and that Mark Neale, a friend of Gibson's was lined up to shoot it. The concept I delivered to him was as follows:

'The idea behind the film would be to take whatever material we are able to shoot in London and set this inside a televisual cyberspace environment, full of graphic sequences and effects, messages on the Internet, Zoo-type tv video juxtapositions to create an interesting multimedia portrait of you and your imagined world. A kind of Don't Look Back cinema verite.' 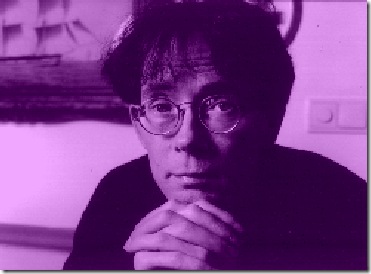 Listen to an audio interview with Gibson by a Swedish journalist, recorded around the same time, now available on the web.

The following day, Gibson faxed a letter to his publisher, which I have a fax copy of. It read, in part:

'Faxing you from the breakfast table, via a Powerbook loaned to me by Voyager, the cyberpublisher, who are gleefully intent on bringing about the death of print....

'John May I recall as being a very nice man and Mark Neale is a friend, but the idea of being followed wound by a camera in London, at this point in my media career, gives me the creeps. (And all anyone really remembers about Don't Look Back is Albert Grossman screaming at the press). So I reluctantly decline etc. Please tell them I've been at this for three weeks and am just too tired to view the prospect with any enthusiasm. '

The same day, fax from Kudos: 'Further to our telephone conversation of the other day, there is one thing worrying me and this is the fact that, to date, William is not aware of the taping of the interview - if I have understood you correctly.' Oops.

On the 23rd, I wrote to Gibson again: 'Could I suggest a much simpler alternative, namely to film a straight-forward interview i9n some quiet and peaceful location such as your hotel. No heavy pressure just an interesting conversation overlooked by one person with ba Hi-8 video.'

Somehow, I've forgotten how, it worked. We ended up shooting the interview in Kudos' cramped offices right next to the side exit of Oxford Street underground station. In the end it was filmed by Grant Gee (an interview with whom you can hear on the Audio Generalist). 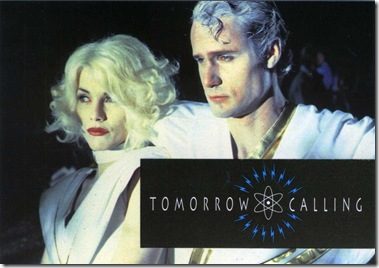 Just before the interview, went with my son Alex (then 21) to press screening of a short film called 'Tomorrow Calling', directed by Tim Leandro and adapted from Gibson's story 'The Gernsback Continuum.' The film starred Colin Salmon, Toyan Wilcox, Don Henderson and Sara Stockbridge. 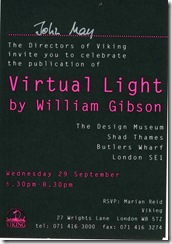 After the interview we went to the press launch at the Design Museum in London, which was fun.

In 1995, I made a further effort to use the interview to get something made. The movie of Johnny Mnemonic was just coming out and it seemed a good hook to try and get things going. The new proposal (dated 19th June)read, in part:

'The interview, by John May, one of the leading writers in Britain on the digital revolution, never mentioned cyberpunk once.

This is Gibson from a fresh perspective, an interview that places his work in a wider context and reveals a great deal about his personality and his working methods, his obsessions and his prose style.

This "lost tape" forms the heart of a unusual digital documentary in which his words and image are fed into a digital blender as part of a poetic and visually powerful journey through the mind of one of the leading science fiction writers of our age.

As he says in the interview, his writing is heavily influenced by first of all punk and then hip-hop, scratch, techno, rap and the merging and emerging black street styles.

This gives us our soundtrack and a highly charged way of constructing what Umberto Eco calls an Encyclomedia, a hypertext tv version of the world through Gibson's eyes.'

This met with general approval. I then did a detailed visualisation based on a detailed analysis on the interview footage. It was discussed with Mark Neale who, Kudos said, 'is thinking of quite a different type of show.' Meetings were set up with John Whiston, then youth commissioning editor at the BBC.

Here the correspondence in the archive file runs out. No joy.

I still have the VHS and, time, resources and permissions allowing, hope to digitise it and make it available on the web in due course. Or maybe realise one of the above visions.