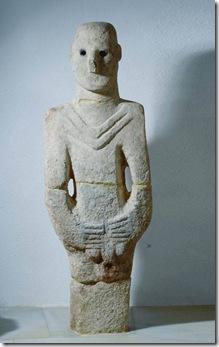 This 2m-tall cream-coloured limestone effigy with obsidian eyes, is the oldest human statue in the world, dated at 10,000 BC. It was officially named the 'Balıklıgöl Statue' (nicknamed the 'Snowman' by the press) and had been neglectfully displayed on a out-of-the-way shelf in a local museum for some years before its full importance was recently recognised.
It was first discovered in 1993 in the ancient Kurdish city of Sanliurfa in central southern Turkey, when foundations were 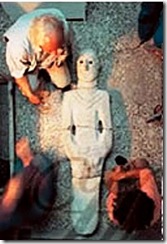 being laid for a new bank, right next to an historic city attraction - the Balikli Gol, a beautiful fishpond surrounded by mosques and gardens.
The statue, which was found in the ruins of an undiscovered Neolithic temple (also dated at 10,000BC), is believed to represent the God of Eroticism or the God of Reproduction. 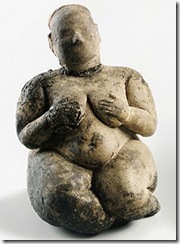 Above: The statue in situ Left: A small female figurine from the same site.
Sanliurfa is close by to the extraordinary archaeological dig at Gobekli Tepe where a fascinating neolithic temple complex has been uncovered in the last fifteen years, consisting of an estimated 20 stone circles (of which four have so far been excavated) that are dated at around 9,500 BC.
The stones are covered with remarkable carving of boars, 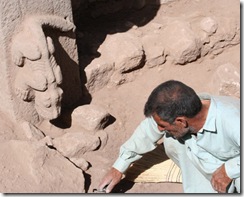 foxes, lions, birds, snakes and scorpions, and their age. They are not on the same scale as Stonehenge (the largest are no more than 30m across), but they are 7,000 years older!
Sources: Red Ice Creations The First Post Mathilda's Anthropology Blog www.bibliotecapleyades.net/arqueologia/gobekli_tepe05.htm
The 'Snowman' may be the oldest 'statue' and the oldest known carving of a man but it is certainly not the the oldest carving of a human figure. That honour currently lies within another recent discovery. 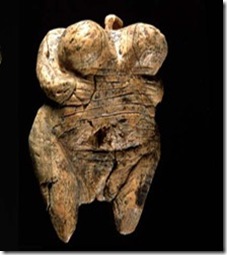 Discovered in 2008, the 'Venus of Hohle Fels' is believed to be at least 35,000-40,000 years old). It is currently considered the world's oldest known depiction of a woman - of any human being. Just over two inches long, carved from a woolly mammoth tusk by early Homo sapiens, it is named after the cave in southwestern Germany in which it was found.
Photo: H. Jensen/University of Tubingen
Sources: 'Pornographic' Statue Could be World's Oldest Piece of Figurative Art.' [Discover]
'A female figurine from the basal Aurignacian of Hohle Fels Cave in southwestern Germany' by Nicholas J. Conard [Nature]
Incidentally, in the same cave was discovered the world's 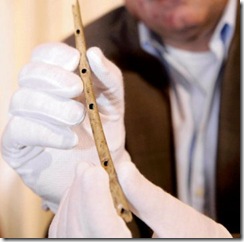 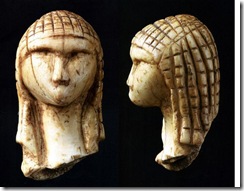 The Venus of Brassempouy is a fragmentary ivory figurine from the Upper Paleolithic which was discovered at Brassempouy, France in 1892. About 25,000 years old, it is one of the earliest known realistic representations of a human face.
http://en.wikipedia.org/wiki/Venus_of_Brassempouy
The Venus of Willendorf, also known as the Woman of

Willendorf, is an 11.1 cm (4 3/8 inches) high statuette of a female figure estimated to have been made between 24,000 BCE – 22,000 BCE. It was discovered in 1908 by archaeologist Josef Szombathy at a paleolithic site near Willendorf in Lower Austria. It is carved from an oolitic limestone that is not local to the area, and tinted with red ochre. Since this figure's discovery and naming, several similar statuettes and other forms of art have been discovered. They are collectively referred to as Venus figurines, although they pre-date the mythological figure of Venus by millennia. http://en.wikipedia.org/wiki/Venus_of_Willendorf
Another ancient figurine:

The Lion man is a 30cm-high lion-headed ivory sculpture, carved out of ivory with a flint knife. It is the oldest human-animal sculpture known.
Its pieces were found in 1939 in a cave in the Swabian Alb, Germany. Due to the beginning of the second world war, it was forgotten and only rediscovered 30 years later.
In 1997/98 it was reassembled and restored. It was determined to be about 32,000 years old. It was originally classified as a male, later as female.
Sources: http://ristorantemystica.wordpress.com/2008/10/
THE OLDEST PORTRAIT OF A HUMAN FACE 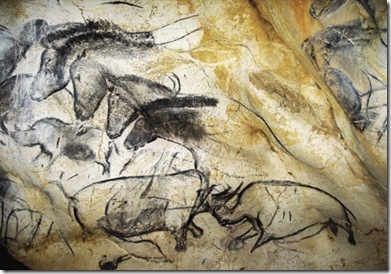 'A frieze of horses and rhinos near the Chauvet cave’s Megaloceros Gallery, where artists may have gathered to make charcoal for drawing. Chauvet contains the earliest known paintings, from at least thirty-two thousand years ago.'


'First Impressions: What does the world’s oldest art say about us?' by Judith Thurman


A woman's touch: Prehistoric cave paintings were made by women as well as men, scientists discover