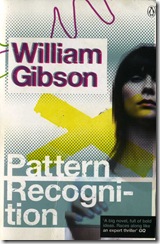 Just finished reading William Gibson's 'Pattern Recognition' and it's brought back a flood a memories of those glorious days of the early '90s - of cyberpunk, the launch of Wired and the wonderful Mondo 2000,

Gibson, of course, the man who coined the term 'cyberspace' in his first book of short stories Burning Chrome, a title which brilliantly captures his obsession with textures and surfaces, and popularised in Neuromancer (1984) - a keynote classic. Gibson is now credited with imagineering many aspects of the digital culture we now all swim in.

Reading Gibson again (I'm moving straight on to his newest book Spook County), coming back to his work after a long break, confirms Gibson's impressive achievement. Writers who he might be compared with include J.G. Ballard and William Burroughs in the sense that the worlds he imagined have proved to be prescient, fertile, stimulating and enduring. His works have seeped into the imaginations of creatives in many fields across the planet.