THE ART OF CAMPING AND WHAT TO EAT? 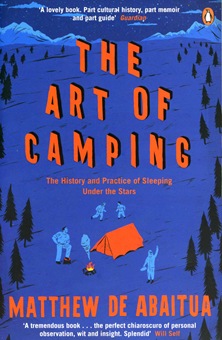 Its always a pleasure to have the opportunity to review books by friends and colleagues, particularly when they are as good as these – engagingly written, deeply researched and full of passion.

‘The Art of Camping’ by Matthew de Abaitua [now out in paperback from Penguin Books] interweaves two strands: the history of camping in Britain and the US from the late 19th century to the present day; the actual practicalities of modern camping in Britain, based on the personal experiences of Matthew, his wife Cath and their kids.

As an armchair camper who last slept under canvas at Glastonbury some time in the ‘80s, I enjoyed vicariously every aspect of the joys and tribulations of Matthew’s (often humourous) camping adventures. Every practical aspect of a camping trip is documented from the art of packing to finding the right campsite, the perfect tent and how best to make a fire and cook over it. There’s much valuable hard-won advice for newbies and experienced campers alike.

The historical material is genuinely fascinating and completely fresh. The American strand traces a line from the 1858 Philosophers Camp in the Adirondacks, attended by the transcendentalist poet Ralph Waldo Emerson, via the camping trips made by Theodore Roosevelt and John Muir that led to the protection of vast areas  of wilderness, to the era of autocamping, inaugurated by a widely publicised trip taken by Henry Ford, Harvey Firestone, Thomas Edison and John Burroughs, and on to the dome tents and backpacking revolution of the 1960s.

On the British side, the book is very interesting on Ernest Thompson Seton and his Indian-inspired Woodcraft Way which, in turn, led to the extraordinary Kindred of the Kibbo Kift and the Order of Woodcraft Chivalry. This left-hand counter-cultural path is followed in preference to the right-hand trail of mainstream Scouting, although mention is made of the German youth movements – the Wanderwogel and the Bunde – which paved the way for the Hitler Youth.

Crankiness and bohemianism abounds in these absorbing accounts which amount to a secret history of groups and individuals outside of the mainstream who were and are inspired by a passion for the wild, for a sense of freedom from the man-made environments of our everyday lives. Matthew is particularly strong on camping’s importance for children – particularly in this modern age of health and safety and media-inspired paranoia.

‘The Art of Camping’ has not made me rush out to buy a sleeping bag and tent but it has given me a new understanding of its many and varied delights. Sleeping under the stars has never seemed so attractive. 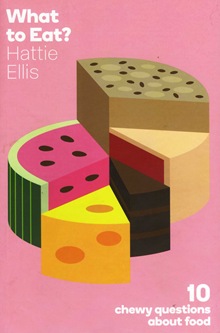 ‘What To Eat: 10 Chewy Questions About Food’ by Hattie Ellis [Portobello Books] is the latest work from a writer whose previous books – Sweetness and Light’ (on bees and honey) and ‘Planet Chicken’ (see Generalist review) – have been widely praised. This new work deserves similar accolades.

Do you remember a time when there were no ‘issues’ with food? Its a long while back now. We are bombarded with contrary opinions and information about the health and nutritional aspects of food and issues to do with the environment, conservation, animal welfare and food production.

Hattie sets out to investigate a number of these issues in a sequence of essays each built around a question: What is sustainable fish? Does any diet work? What is a good apple? Can I eat to avoid heart disease and cancer ?

In each case she not only does the deskbound research but also goes out in the field, talking to producers, retailers, activists, NGOs and other food experts. In addition, she personalises the issue by documenting her attempts to modify her own kitchen practices and food buying habits, conducting culinary experiments informed by what she has learnt.

The result is both very readable, highly informative and thought provoking. When you learn that about a third of the UK’s carbon emissions come from food and that the average British household throws out about a quarter of its food, at a cost of £680 a year, then its obvious that we have to rethink many of our existing practices. Hattie’s clear-sighted guidance accentuates the positive and opens our minds to viable alternatives. She successfully communicates her love of good food and her passionate belief that we can all eat better without either ruining the planet or bankrupting the family budget.